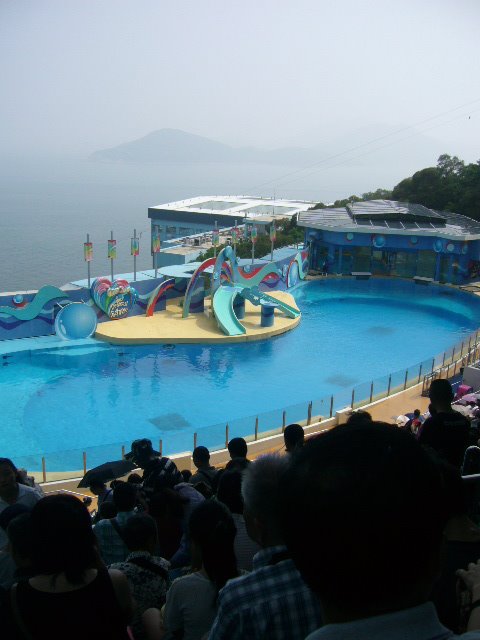 When I was younger, it seemed that everyone at school would come back to school in September with tales of swimming with dolphins, usually in some exotic country called ‘America.’ At times, it felt like I was the only person who hadn’t been swimming with dolphins. Whether this triggered some sort of deep rooted inferiority complex in my 10 year old brain, I’m not too sure. However, this summer I visited Hong Kong and, when I heard you had the opportunity to meet a real life dolphin, I grasped the opportunity with both hands!

A half hour bus ride from the centre of Hong Kong sits Ocean Park, a fantastic mix of both a zoo and a theme park and which can easily provide a whole day of fun for the whole family. The park also features an Ocean Theatre, which – for a fee – allows members of the public to get up close and personal with the gentle creatures.
Arriving at the theatre with my friend Abby, we met up with a small group and were taken down to the dolphin pool and led out to a cosy room round the back. For the next half hour, one of the park’s workers gave us a mini-lesson on everything dolphin: we learnt about a dolphin’s anatomy and the dangers posed to them in the wild – and even watched a video of a dolphin at the Park giving birth. As gross as this may sound, it was actually fascinating, and provided us with a real respect for the beautiful mammals that face so much adversity.
Once we’d obtained our degrees in Dolphin, we were invited to step into our glamorous waders and were taken out to meet our VID (Very Important Dolphin!) and our host Jason – the happiest and most enthusiastic guy you will ever meet. He introduced us to our elderly dolphin Esther who was swimming alone happily in a shallow pool, waiting for us to come join her. CUE EXCITING SQUEE.
Hopping into the pool, Jason used a whistle to bring Esther over to us. I will admit – at this point, my heart was in my mouth. As excited as I was, I couldn’t believe I was finally in a pool, with a dolphin! As she swam by us, we all stroked her tummy, which felt like one of those inflatable rings you get at the seaside, but thicker. Jason then made us stand in a line and hold out our fingers and wiggle them. To our surprise, Esther then began to ‘sing’. We then were told to splash her with some water, which resulted in her splashing us back (which is always welcome in humid Hong Kong!)
All too soon, our time with Esther came to an end, but it was time for our photo finish. Holding our arms out in a circle, Esther swam through them until we lifted her nose slightly out the water and posed for the picture!
My encounter with Esther was easily one of the best experiences of the holiday. Have you ever had the chance to swim with dolphins – if so, what was your experience like?
Visit Ocean Park’s website at: http://www.oceanpark.com.hk/html/en/home/