How Not to See Macau… 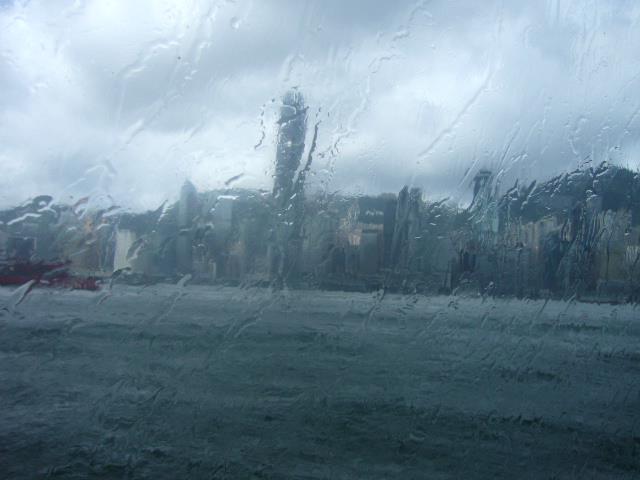 The former Portuguese colony of Macau lies around 40 miles from Hong Kong and has recently seen a surge in popularity due to its part in blockbusters such as, erm…Johnny English Reborn. So, when my friend Abby and I were in Hong Kong earlier this year, we decided to make a day trip to Macau to see what all the fuss was about.
What followed was a series of disastrous events worthy of being in a Monty Python film – despite not being funny at the time, looking back it’s clear we did pretty much everything wrong.

So, if you’re planning to take a trip out to Macau, take heed of these tips on how NOT to see the sights:
Try not to go when a typhoon is on the way
If you’re short on time, sometimes you can’t help when you visit. But, as we found out, sitting through an hour boat journey when you’re heading towards a typhoon is not fun. There will be strangers vomiting all around you, and you will regret having that morning cup of tea. It’s also inevitable that you will then spend the best part of the afternoon feeling like you’re still on the boat, and will not enjoy eating anything all day in anticipation of the return journey.  Once you get there, the only thing as bad as the weather will be your mood.
Do not go on a Saturday
I’ve had many stupid ideas whilst travelling, but this was probably the worst idea ever.  We managed to get a seat on the ferry OK, but when we arrived in Macau we were in the immigration queue for almost two hours waiting to go forward to get our passports stamped. And, for every person who understands and follows the queuing system, there will be another 100 who are too impatient to adhere to said queuing system.  Cue: an angry, soul destroying wait as you gaze out into the mystical land of Macau (i.e. the shops in the arrivals lounge).
Have your head screwed on when you arrive
Once we arrived, it’s fair to say we weren’t in the best of moods. After a nightmare journey which we thought would be our last and a two hour wait to get as far away from the sight of water as we could, we were then confronted by a dozen or so men attempting to offer us bus/rickshaw/car tours of the area. Probably spurred on by how disorientated we looked, each were competing with each other for the best price but a) we didn’t want to set foot on anything that could potentially bring on the nausea again and b) we were reluctant to jump into a car with a random man. We promptly turned on our heels and returned to the terminal in search of cake to cheer us up.
Have a vague idea of where you’re going and how to get there
Once we’d decided to make our own way to the centre of Macau, we suddenly realised that we hadn’t a clue how to get there! We also hadn’t even a clue of what the main things were to see – apart from a few casinos and a Hard Rock café, we were pretty clueless. Luckily, there was a Tourist Information stall by the exit (our first lucky break of the day!) who advised us on which bus to take and where to get off. Organisation is key and to get the most of the day have an idea of which sights you want to head to. (This is pretty obvious, you would think, but no – we thought we’d wing it.) We played it safe by taking the bus to nearby Senado Square, from which the Cathedral of St Paul, the Museum of Macau and the casinos are all within easy reach!
If you’re planning on heading to Macau, it’s definitely worth taking the time to carefully plan your visit. After (almost) losing the will to live we took temporary residence in the casinos, sipping orange juice and watching the fantastic live acts take to the stage between the gambling tables. Jaded, we took a taxi back to the ferry terminal and were grateful to arrive back at our hotel in Hong Kong to put the day behind us!