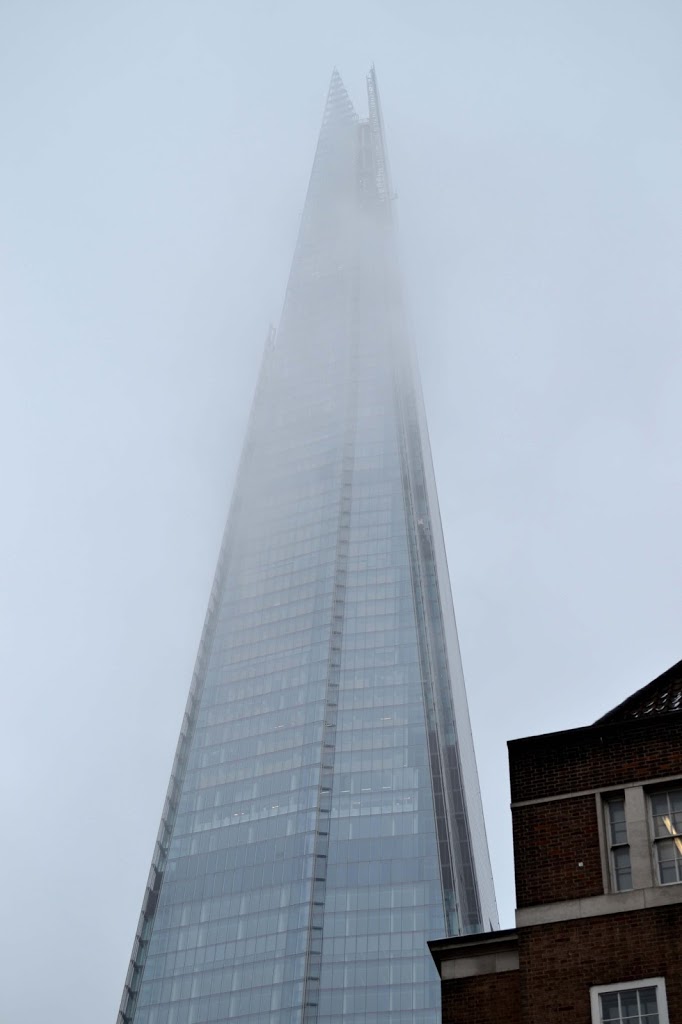 I’m in a crowded lift and my ears are popping, but as we ascend to the Shard’s 68th floor, I can’t contain my excitement. New York has the Empire State Building, Berlin has the TV Tower – and now London has a tourist attraction to rival all.
The whole experience is like being at an airport. After breezing through security, you take off in one lift (to the 33rd floor) before a second lift whisks you right to the top – the whole time you’re kept away from windows in order to preserve the surprise. As you leave the lift, you take a few small flights of stairs up to the 69th level before being rewarded with the best view of London going.
I’ve come – it feels like – on the worst day imaginable. After a week of snow and sludge, I arrive to find the top of the Shard almost covered by clouds. “Great,” I think, “At least I’ll be able to go to the toilet when I get in.”
Thankfully, once I arrive on the viewing platform on the 69th floor, the thick cloud has parted and we’re able to see a good mile or two in all directions. And I’m starting to think that maybe I didn’t pick the wrong day to come – the snow-topped buildings form hypnotic patterns, providing an even more spectacular view from above. (Snow in Central London becomes a rarity with all the hoards of crowds and cars). Even though I’m in a 21st century building, at times I feel like I’m looking down on a London of the past: a Dickensian London in the grip of a particular gruelling Winter!

The main thing that struck me – stupidly – was just how high you are. I’ve been up the Monument several times, but the Shard takes London tourist attractions to the next level. This particular view of London is one that’s never really been seen (unless you’re landing at an airport, but even then you’re likely to be craning your neck in order to see anything of interest.) I spent the best part of an hour soaking up the sights, but you can spend as much – or as little – time as you like on the viewing platform.

The developers may have missed a few tricks. A glass floor area like the one found in Skydeck Chicago would keep youngsters (and 21 year old bloggers who haven’t yet grown up) amused, and the lifts are a little on the small side. Yet these are minor and in no way detract from the experience on offer. Each half hour slot has a limit on the number of people allowed in, ensuring you’ll not have to wait around too long for a lift.
One of the most exciting features of The Shard is the free interactive viewing Tell:scopes that are dotted around the 69th floor. You can choose to view the city Live, or during the day, sunrise or night – and then simply move the telescope around to focus on key buildings which are then pointed out on the screen. It’s a fantastic concept – unlike traditional telescopes that eat into your change, these allow groups to share in the excitement of picking out key tourist attractions.
For those of you with a head for heights, pop up to the 72nd floor for an even more stunning view – this time without the roof! It’s probably one to avoid if it’s raining, but it’s such an exhilarating feeling to be over 800ft above the ground, wind whistling through your hair. (Speaking of whistles, on a windy day you may hear the wind whistling through the building. When you get in a lift, pause over the gap and look down – you’ll feel a rush of wind in your face! It’s a slightly creepy sensation…)

Predictably, the gift stores sell everything you could possibly want. Guide books retail at just under £10, and you can also buy the usual selection of postcards, posters and cards. Not one to pass up the opportunity, the shops also sell cuddly foxes thanks to Romeo the fox who made the headlines after turning the 72nd floor of the skyscraper into his permanent residence in 2011! (BBC News confirms he has now been reunited with his foxy family in Bermondsey…)

As the clouds draw in again, I take it as my cue to leave. I realise I’m genuinely envious of the people who get to work in one of the Shard’s many offices, or stay in the new Shangri-La Hotel – and even more envious of the people who can afford to live in one of the building’s apartments: a bargain at only £30 million(!). The Shard stands to do for London what the Empire State Building has done for New York – it’s a thrilling viewing experience that should be a must-see for anyone visiting the Capital.
The View from the Shard opens to the public on 1st February and is open 9am – 10pm daily. There are discounts in place if you book up to 24 hours in advance. For more information, visit www.theviewfromtheshard.com

So, that’s my take on the Shard! Are you planning to take a visit, or do you have your reservations about it?