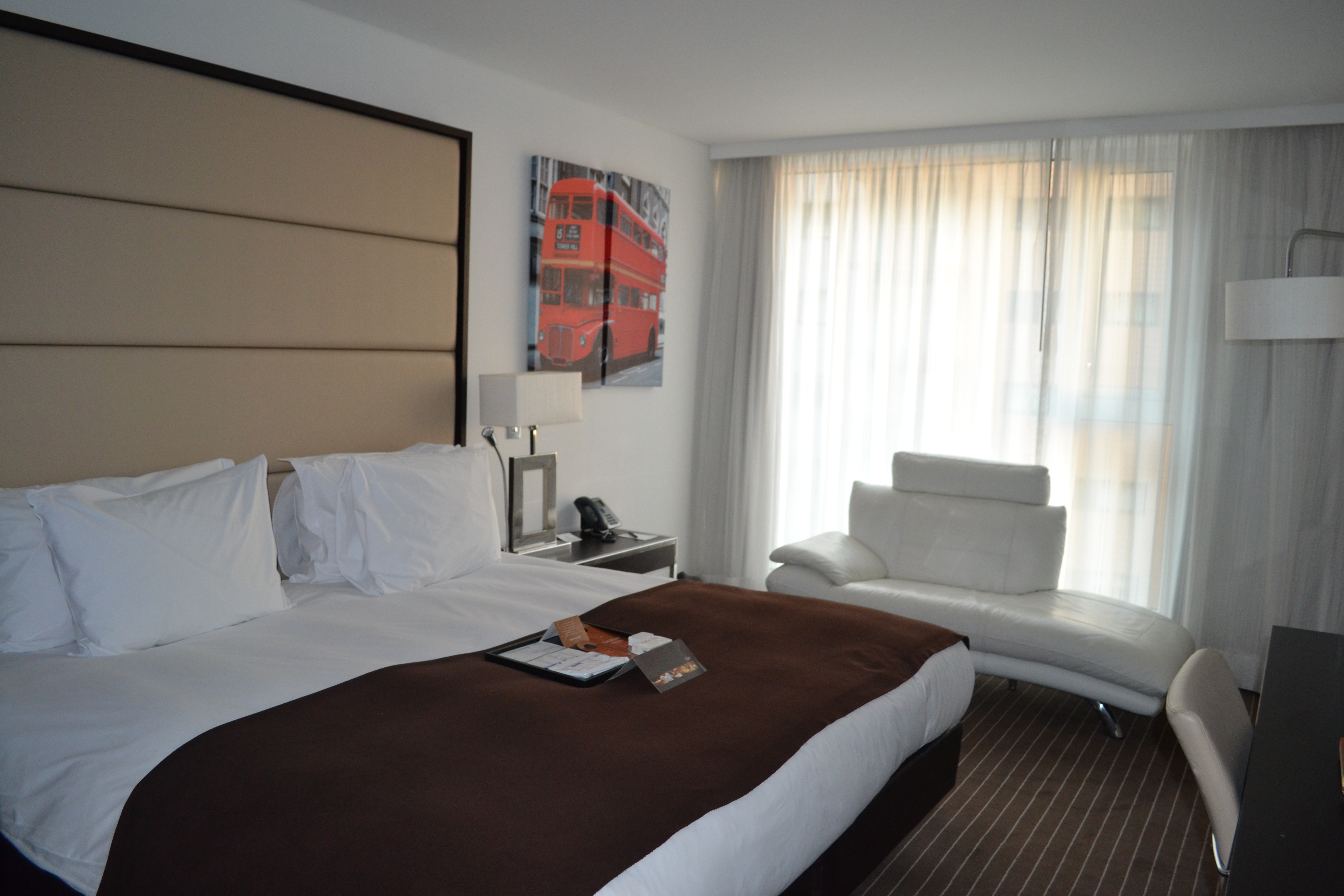 The first thing we saw was the bed. It’s freshly made, plump and HUGE. With Ian topping 6 foot and my legs often kicking into restless mode at 3am, space is something that’s always on top of our wish list.

We’re at the Pestana Chelsea Bridge Hotel and Spa for a relaxing night away from dissertations and essays. Situated in the upmarket London borough of Chelsea, next door to Battersea Power Station and Battersea Park, the hotel is the first of the Pestana group to arrive in the UK.


I was doubly excited because I have never stayed in a hotel in London. Living just a 45 minute train journey, it’s never really been something I’ve thought of – that and the fact it’s super expensive. When I saw the Pestana Hotel, however, I was swayed by its location and its impressive spa facilities. After seeing the rave reviews on Trip Advisor, I managed to snap us up a room for a little taste of luxury in our favourite city.

At £95 per night it’s not cheap but you get your money’s worth.

This hotel easily wins the award for having the biggest bed I have ever seen in my entire life as well as the plumpest pillows I’ve ever had the luxury of sinking my head into. The room itself was suitably spacious, with a chaise longue by the window and all the mod-cons including a flatscreen TV and an iPod dock. The bathroom brought luxury to the next level, with soft lighting and a tilted bath for comfort and relaxation (and also one that Ian could actually fit in!) For those who prefer washing standing up, a monsoon shower is also included, along with the usual samples of shampoo and body wash.


Another thing I was really impressed by was the attitude of the folk at reception. Those who know me will be aware that poor Customer Service is my biggest bug bear, but we were warmly received and felt like valued guests.

In the rooms, free tea and coffee was also available which is always the way to my heart.


With the price of the room you get free access to the spa which boasts an indoor pool, sauna and steam room (with an extra cost for massages). It’s very easy to while away a few hours and is definitely one of the main draws for the hotel!

There were a few slight annoyances, but nothing that really detracted from the overall experience. Our hotel room was a bit of a black hole for phone and internet signal (WiFi is free in the lobby, but not in the rooms) and the fridge was…well, it was just a cupboard that was practically room temperature.

In the evening, we were tempted to relax by watching a film in our room but were shocked to see renting one came in at a costly £10 for 24 hours. For this price, you might as well head to the nearby Curzon Cinema in Chelsea for a look at what’s on!

The only other downside to the hotel is that it’s in a bit of an odd location, with it being a 15 minute walk to the nearest tube station (Sloane Square) and another 15 minute walk to the nearest Tesco (for essential midnight cakey snacks.) It’s not insurmountable, but could prove a pain if you’re staying there for longer than a few nights. That being said, the walk to Sloane Square over Chelsea Bridge is pleasant enough, and there are regular buses heading into Central London (bus routes 137, 344 and 44 are the main ones you’ll need.)

For the ultimate in relaxation, visit the spa area early in the morning. It’s well worth the early start – we went in the evening and it was absolutely packed, with the pool fit to burst. The next morning it was a completely different story and we even had the pool to ourselves for a while!


The Cosy Traveller rating: 4 stars
Pestana Chelsea Bridge is a London gem and perfect for a luxury city getaway – it’s so good I almost didn’t want to tell you about it!