Guest Post: 4 Mistakes You Should Try Not to Make Whilst Travelling 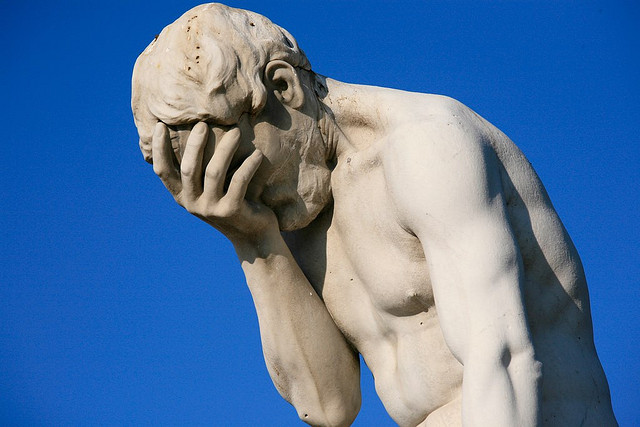 As a seasoned traveller, you make mistakes. Luckily after every mistake you make you learn from it (which I guess is the silver lining to this cloud) but at the time there’s nothing quite as bad as the blunder that has just befallen you. I’ve made my fair share of blunders, and so have people I’ve met and come across along the road.
They say there’s no better way to learn that to listen to other people’s tales, so here are 4 tales of misfortune for you to enjoy. Well, not enjoy (per say) but learn from and laugh at.

Don’t eat dodgy food before a flight
This is one of my own mistakes, and what I can only describe as the worst experience of my lift. Hands Down. It started on the 1st of January – I was meeting 10 friends at the airport to board our flight to an Italian ski resort. Because our flight was so early though – 7.30am – we all decided to meet in the airport the night before and just sleep in the departure lounge together.
I was one of the first to arrive, and having enjoyed a chicken pasty on the train in, I was quite content waiting it out for the others to arrive. And then something bad happened. I got food poisoning.
That’s right. Six hours before a flight, and I was throwing up over the airport floor uncontrollably. It was literally hell, and I was soon picked up and carried off to the airport’s A&E hospital area, when I spent the next 5 hours doing a mixture of three things; passing out, throwing up and weeping into my jumper.
I was pretty sure I wouldn’t be able to fly, to be honest, I could barely walk or sit up straight – so I had reasons to be un-hopeful. But surprisingly, I was carried out (all the way through customs and onto the plane) and let onboard. I think my friends must have made a strong case.
I spent the plane flight in just as worse state as I had spent in the airport, curled up in a ball at the back where an airhostess kept a watchful eye on me. What lesson did I learn from this? NEVER eat dodgy food before a plane flight. Ever since, I’ve always stuck to what I know best. Something safe, that my body recognizes. And that isn’t going to come up in reverse an hour later.
Don’t get over-excited
This is a lesson I learnt from my Mum. When I was 16, she and my step-dad headed away for their first vacation without the kids in about 2 decades. They went to Venice – all very nice – I’m sure you’ll agree.
Anyway, within 3 hours of being in the city, my Mum had managed to lose not only her purse, and my step-dad’s wallet, but both passports too. What a disaster.

It happened, because they’d simply been to excited to get checked in and start exploring – so much so they’d completely forgotten their hand bags and abandoned them in the water taxi – which drove off as soon as they departed the vehicle. It ruined their holiday as they spent 2/4 days queuing up at banks and embassies, and it cost them a fortune too.
Lesson learnt from this? Don’t rush yourself and don’t get carried away. Not least, until you know you’re safely checked in and you have all your belongings with you.
Don’t forget suncream.
Let me let you in on a secret. There is one way you can destroy a holiday more than any other. And its name is Sun burn.
I mean, proper, awful, can’t even sit down, sun burn.
If you’ve ever experienced it, you’ll be nodding your head in agreement right now. And it’s so true. Forgetting about sun cream is one of the worst mistakes you can make when travelling – and it’s one I know I’ll try my hardest never to make again.

Bad sunburn ruins everything. First of all, it ruins your appearance, and in every photograph you take, you’ll look like a lobster. Secondly – it’s gosh darn painful. So painful, it’ll stop you from sleeping, or it’ll inject so much fear into your skin that ironically, you’ll be sacred of putting after sun or cream on because it hurts too much touch it. It’ll hurt when you get dressed too, and every time you’re in the sunshine for the rest of the vacation too. Which is not fun. At all.

So just slather it on. Because you’ll regret it if not.
Don’t forget (or ignore) your insurance.
If you’ve ever lost a suitcase, had something stolen, or even been injured whilst away travelling – you’ll know the value of having a decent insurance plan at hand.
I think a lot of people shrug insurance off. Like:
“We’re only going for a few days, we don’t need it”
Well think again. It’s those kinds of flippant remarks that just invites bad luck to come knocking at your door. A friend of mine had no travel insurance when she visited Dubai a couple of years ago. She’d been before, she was only staying for 4 days and it was a quick beach break. Nothing exciting, nothing adventurous.

Guess what happened… There was a volcano eruption. In Iceland. Which (by the way) is MILES away from Dubai. Still, it managed to screw up her holiday, meaning she couldn’t fly back and her flight was cancelled. Unfortunately though – because she wasn’t insured – she couldn’t afford to stop in her hotel for 5 additional nights, because it wasn’t covered by insurance it had to be covered by her.
Just goes to show, you never know what will go wrong, so don’t invite bad luck along. Make sure you’re protected against it.

About the author:
Milda is the Community Manager @ AsiaRooms. Born in Lithuania (love it!), studied in the UK, travelled around Asia and USA, taught in Africa and now residing in Singapore where, equipped with a strong cup of coffee and surrounded by an amazing team I’m blogging about travels, cultures, events and hotels in Asia.