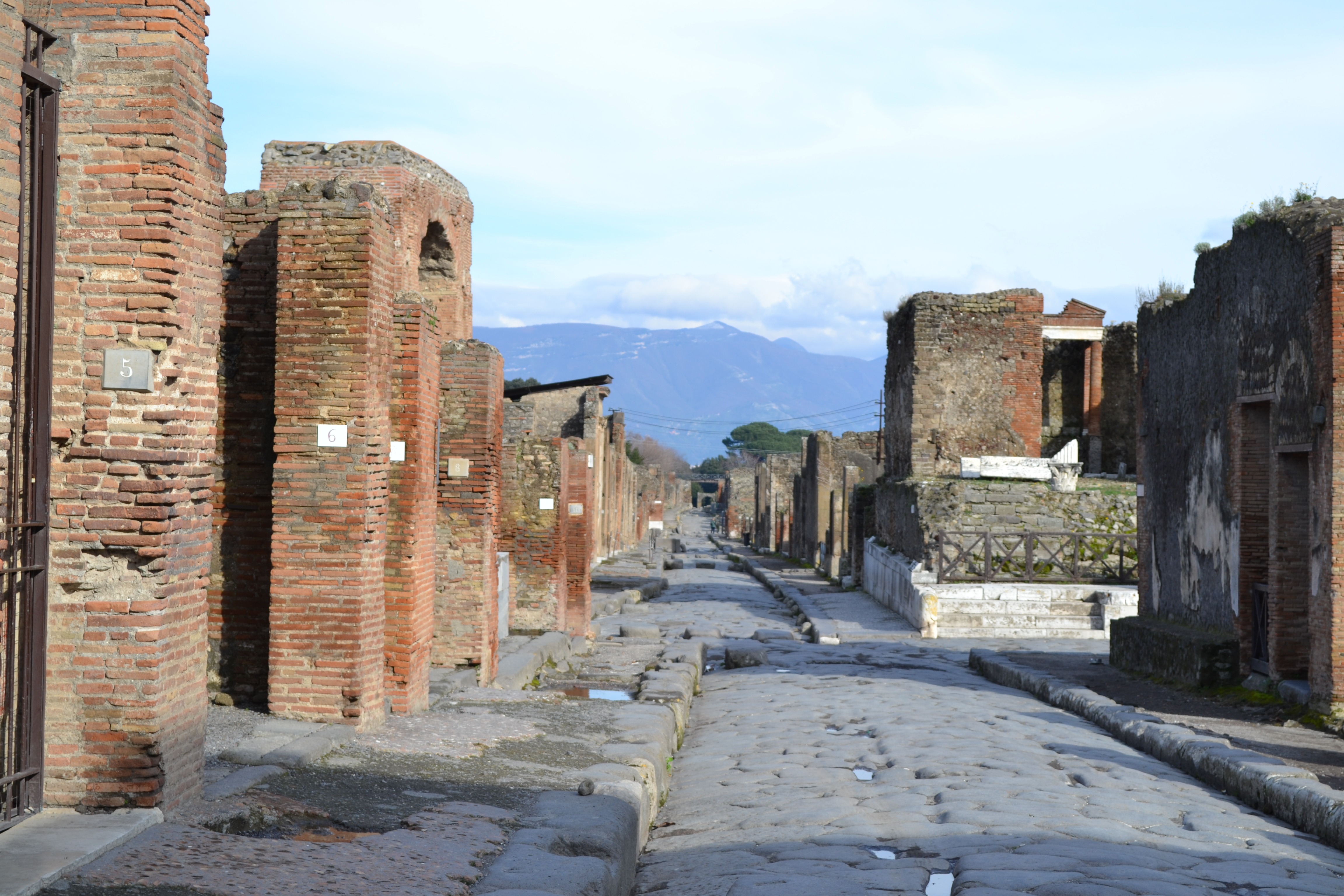 It was a university module on Pompeii that meant I just had to pop over to Italy for the weekend.
I mean, sure, I could have read up on mountains of academic literature, but there’s only so much you can learn from textbooks. Plus, having visited Auschwitz and Berlin while studying for my History A Level, I knew I would get a lot out of the trip. (As well as a few days in Naples, soaking up the pastries, ice cream, pizza, general carbs…)
Ideally located just a 30-40 minute train journey from both Naples and Sorrento, Pompeii makes a convenient day trip for those wanting to get the most out of the area. It’s also rather affordable, with a return train ticket from Naples costing just €4.80 (2013 prices!)
We had the use of Alessandra, a fantastic tour guide from the Italian tourist board who took me and my friend on a private two-hour tour around the ruins for €20 each. And believe me – a tour guide is invaluable. With five square miles of cobbled, uneven streets to explore, a guide helps you piece the ruins together, so it’s not just a case of “Hm, another random collection of bricks.”
From all corners of the ruins, the imposing Mount Vesuvius can be seen. This was a pretty unnerving sight (especially when Alessandra said it was due another eruption), but also because it’s a pretty eerie thought to consider that the very thing that caused all this destruction on the morning of 24th August, 79AD, is still very much with us – and active. When Mount Vesuvius erupted, it spurted out enough gas and pumice over the next 24 hours to cover the city of Pompeii in seven feet of ash. This is (still!) gradually being removed, in order to uncover the city’s secrets.
One of the most iconic sights in Pompeii are the moulds of bodies of those who died during the eruption. We were taken to the Garden of the Fugitives where 13 bodies lie, all in their final resting places as they succumbed to the ash. The Amphitheatre is an awesome site. Located next to the Gladiator barracks, it’s thought to be the earliest known permanent stone amphitheatre in Italy, and had space for around 20,000 people. As with all ancient Roman sites, the seating was very hierarchical, with the richer men being afforded seats beneath canopies to give them shelter from the burning Mediterranean sun. Fan of art history? Make sure you head along to the Villa of Mysteries which, ironically, was the first building to be hit by the volcano, but is the best preserved. The walls are painted with the most vivid and spectacular frescos, including this one depicting a young woman’s progression into marriage. I took the following photo because, at the time, I was writing university essays (oh, the painful memories!) on two key issues: one, democracy in Pompeii, and two, how well preserved the ruins have been since they were first excavated. Notices, including voting posters, were drawn up all around the area, and are now protected from the elements by glass. However, they’re still slowly fading which begs the question of how long this incredible slice of history will be around for us to see. See those stepping stones in the background? They’re very fun for pretending to be a mountain goat as you gracefully leap from stone to stone. However, they also served a very practical use. When fountains of water filled up with rain water, the water was released to clean the roads. As it flowed through the streets and into the nearby sea, residents managed to get around by hopping on the stones. Pretty good work-out if you ask me… There are many stray dogs basking in the Italian sun around the ruins (one even met me at the Pompeii train station, where I spent a good 10 minutes making a fuss of him – much to the horror of many people around me. I probably have rabies now.) The dogs are such a familiar sight, they’ve even been named ‘The Guardians of Pompeii’ by locals. Think Pompeii is all about the 79AD eruption? Think again! The site’s storage stations are filled with items not yet on display to visitors – including human remains from the Bronze age! The perimeter of the city is dotted with old graves, ranging from the subtle to the ornate. It was believed by Pompeians (is this a word? It is now) that if ever their city was attacked, their ancestors would rise up to protect them… Have you been to Pompeii? What was your favourite place, and what hidden gems did you uncover?
Let me know in the comments below!