What Happened When I Met My Travel Hero 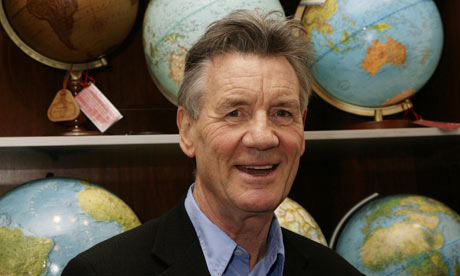 “Are you OK back there?”

I quickly scribble a text to my boyfriend who I’ve just noticed is about 10 rows behind me. I lost him about half an hour ago when he made the fatal mistake of stopping to look at a book.

I look down. My text won’t send. Oh well, it was the thought that counts.

We’re at the new flagship Foyles store in London, at the opening of the travel department by none other than Michael Palin – globetrotter extraordinaire, travel writer, and, of course, one sixth of comedy group Monty Python.

Like a complete fan girl, I’ve managed to work my way to the front row, right by the barrier, just a few metres from where Palin will cut the red ribbon and officially declare the department open. I’m clutching my phone, which I occasionally look at in order to try and calm my excitement which is threatening to burst out with each passing minute.

Michael Palin has always been a name which has been banded about our household with much buzz. Ironically, it was my beloved Grandad – a man who, after travelling around Europe during WW2, declared that ‘everywhere is just the same’ – who really introduced me to the wonder of Palin. When my Grampa became ill and couldn’t move around as much, he would love to sit in front of the TV and watch one of Palin’s series. Over the years, we picked him up countless of Palin DVDs which, when he passed away in 2009, I inherited. Watching Palin travel through the Himalayas, across the Sahara and around in the world in 80 days not only made me feel closer to my Grandad, but really opened my eyes to what was out there.

When Michael Palin eventually walks out onto the Foyles shop floor, he is met with a flash of cameras from paparazzi and eager fans excited to see their hero in the flesh. Now painfully aware that I am standing RIGHT in front of him, I try to put on my intellectual, inquisitive face as he talks. It fails. I came across as more of an adoring fan, unable to take my eyes off him as he plays to the audience with a few twists and turns, followed by a speech about how he’s honoured to open the department – one which has, traditionally, been shoved to the back of a bookshop ‘next to erotica and gardening’. He has all eyes on him as he pirouettes under the ribbon, poses for a few pictures, and gallantly cuts the ribbon to a rapturous applause. And with that, he’s ushered off. By this time I’ve relinquished my front row spot to a shorter lady behind me, as I’m keen to retreat to the table of complimentary wine and reassure my boyfriend I haven’t quite forgotten about him.

After that, we had about half an hour to browse the new department and Palin’s pick of his favourite travel books, before we race upstairs to grab our seat in the new auditorium. Originally part of Central St Martins College of Art and Design, an infamous university hub of artists, the auditorium has retained its warehouse feel, decked out with white walls, exposed piping and views out onto Charing Cross road.

Over the next hour, Palin was interviewed by novelist Marcel Theroux (brother of Louis) about his travels, covering everything from foreign toilets to family holidays. He spoke candidly about the difficulties of leaving his then 13 year-old daughter alone for months at a time while he went off to film his ‘Around the World in 80 Days’ series, before confessing he would move to ‘either the South of France or North of Italy… Or the Philippines’ if he had to pick. After a few questions from the audience, we were invited to queue up for a meet and greet.

I didn’t realise this was happening?!

I’m thrown into a mixed state of overwhelming excitement and dread as I realise I haven’t a clue what to say. I am someone who needs a script in front of her before she even makes a phonecall to the local takeaway, so God knows what it would be like to string a sentence in front of my actual idol.

We dutifully queue up for about 15 minutes. As we approach the front of the line I hold my hand out to show my boyfriend how much I’m shaking.

“It’ll be fine,” he reassures me. “Just talk to him about your travel writing.”

With a renewed sense of confidence, I skip forward when it’s my turn, singing out a hello and greeting him – Palin, my absolute idol – with my signature awkward wave. “I…uh…” I start stroking the table. “I just wanted to say how much of an inspiration you are to me.” (except I’ve got my retainer in, so it sounds like I’m calling him an ‘inthiprathion’.)

He’s signing my book and isn’t looking up. QUICK, SAY SOMETHING ELSE.

“I’m, uh, I’m trying to get into travel writing myself.”

At the mention of this, he looks up and says: “How great! Have you had anything published?”

I stutter out: “Well, a few things here and there and some feature pieces. I also have a blog!” I say the last sentence with a bit too much excitement, like I’m explaining the internet to my Grandad for the first time. ‘This is Michael blooming Palin,’ I tell myself, ‘Who’s travelled all over the world over the last 20 years and written countless books. He’s hardly going to be impressed by a blog!’

“And do you enjoy writing?” he asks.

I thank him as I take my now-signed book, and turn to step out of the way. As I stumble stupidly ungracefully out the way, he calls out to me: “Good luck! ”

Shaking and almost on the verge of tears (yes, I’m cool, I know) I bounce down the 6 flights of stairs and out into the street, flushed with excitement. True, our meeting is hardly going to win any awards, but it has succeeding in imbuing me with even more of a desire to get out into the big, bad world.

They say to never meet your idols to avoid any disappointment, but I can honestly say Michael Palin is not someone you will ever think that about – his effortless wit and charisma has you enthralled from the moment he steps into the room, and you really get a sense of his passion for travelling and different cultures.