What You Can See on Iceland’s Golden Circle Tour 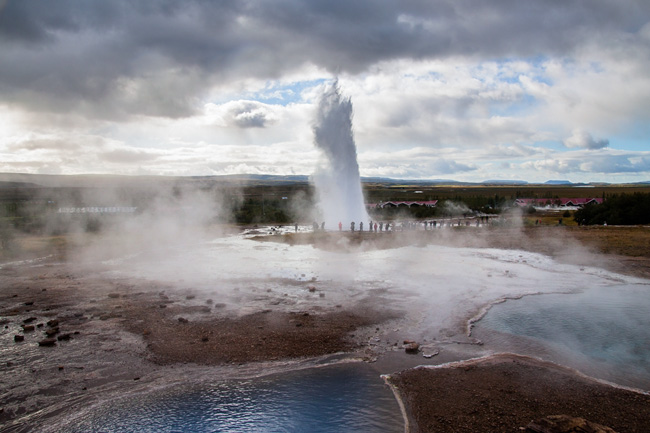 There aren’t many day trips where you can cross over two continents while witnessing stunning waterfalls, steaming geysirs and lava fields that stretch on for miles.

Step up the Golden Circle: the must-do tour for travellers to Iceland. The tour is the best way to see some of the country’s most iconic geological sites, all while exploring more of the beautiful landscape outside of Reyjavik’s city centre.

While there are many Golden Circle tours available (you can even do a self-drive one if you have that all important driver’s license), we opted to go with Reykjavik Excursions, as they offered a pick-up service from our hotel.

Reykjavik Excursions also run an afternoon Golden Circle tour which is good if you’re running a bit short on time. As we really wanted to get the most out of the country and spend a bit longer in each location, we decided to go for the full-day tour, which was only an extra £5!

What is the Golden Circle Tour? The Golden Circle is a popular sightseeing route, taking travellers around three key areas in the South of Iceland. Leaving Reykjavik, the tour heads out towards Gullfoss, Geysir and Thingvellir National Park, looping back round to return to the capital. But what exactly is in each place?

Our first stop on the tour, we could hear the waterfall before we even saw it.

Translating as ‘Golden Falls’, Gullfoss waterfall gushes down two tiers; the first sees water traverse over jutting-out rocks, before it pours down the second drop into a seemingly bottomless crevice.

And yes – those are people right up against the edge of the waterfall! From a distance, this absolutely terrified the life out of me, but as we followed the tourist trail we picked up the courage to clamber over the rocks and out onto the ridge so that we could feel the spray of the water on our faces. The second stop was the one I had been most excited about. Geysirs are, for me, the epitome of Iceland and its geologically rich environment.

The Great Geysir has been known to erupt up to 70 metres in the air. However, it’s greatly influenced by earthquakes in the region, and is now virtually inactive. The biggest draw is Strokkur geyskir. Although smaller – water spurts up to around 40 metres high – it erupts every few minutes, giving visitors the chance to see this beautiful region in action.

The surface of the water bubbles for what seems like ages, while tourists wait with cameras poised. As the bubbling gets more and more frenzied, you’d better stand back, as the plume hurtles up before you can even reach for the umbrellas.

Also on-site is a centre which features a multi-media exhibition, shop and restaurant. We didn’t have time to check this out unfortunately, as we were too busy trying to snap pictures of the geysir in action! The final stop on our day was the UNESCO World Heritage Site of Thingvellier National Park (also written as ‘Þingvellir’). The site of a rift valley, in parts you can see the tectonic plates jutting out from the earth, which is a pretty surreal sight. Our tour was led up the side of one of the hills and onto a wooden platform, allowing us unparalleled sites across the land with hardly a house, vehicle or person around. Bliss. Our coach stopped as we passed over the tectonic plate ridge

Strictly not really part of the Golden Circle tour, our day also included a stop at this huge cultivation centre where tomatoes are grown – all using the natural geothermal heat underground. It was incredible to walk around the centre, and hear a talk from the owner about the various techniques used.

They even had a cafe on site, where we tucked into home-made soup from the centre (which almost felt like murder…). Our eight-hour tour brought us back to Reykjavik for around 5pm – easily enough time for more evening shenanigans!

The Reykjavik Excursion Tour runs every day of the year. French, German, Scandinavian and Spanish guides are also available on specific days of the week.

Have you been on the Golden Circle tour? If you have any other questions, please feel free to email me or ask them in the comments below!