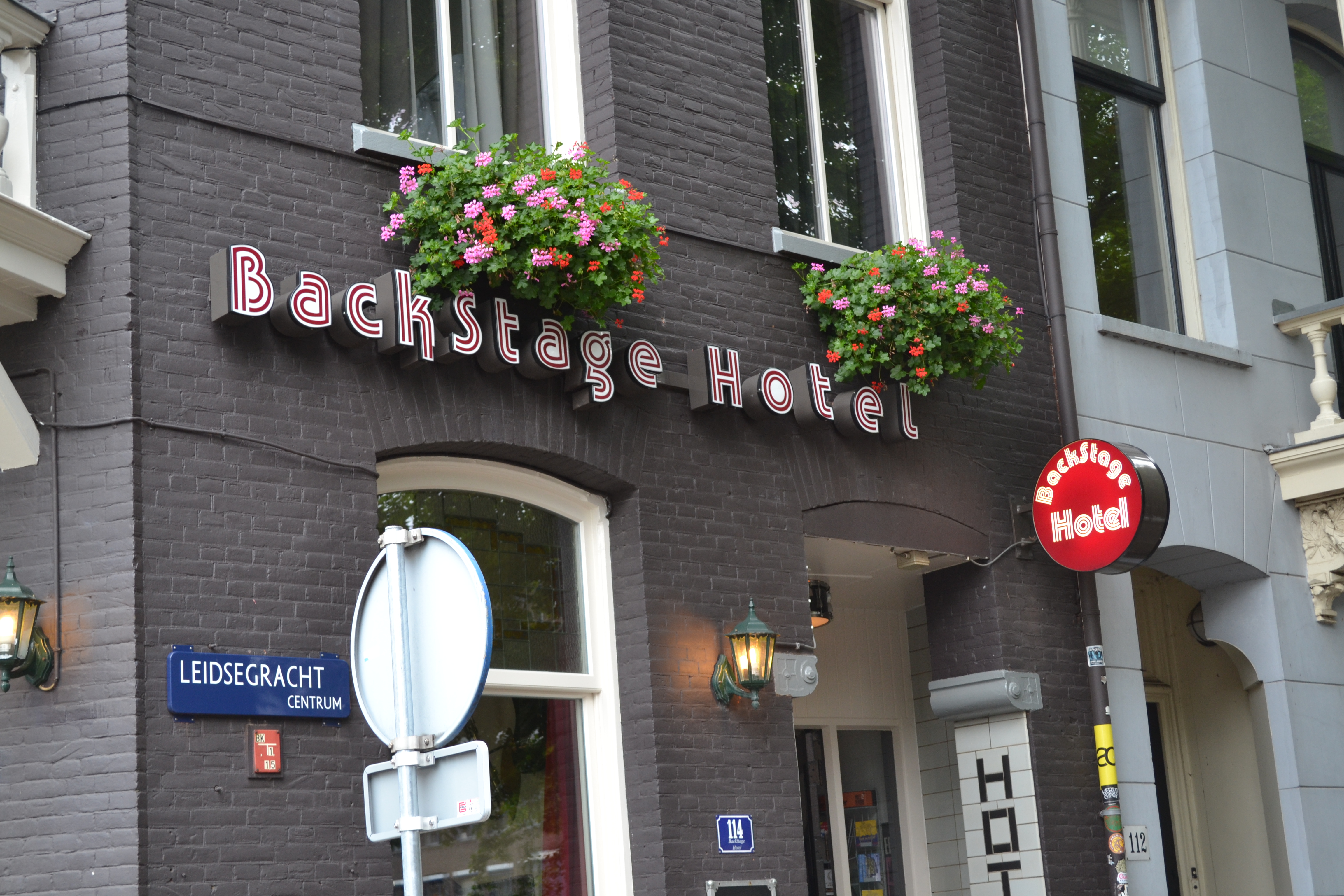 Have you ever stayed in a place where you just think, “Wow. I really do not belong here.”?

Well, that’s exactly how I felt when I arrived at the BackStage Hotel. With its impossibly cool bar area, featuring white scribbles on the walls, piano and even the ceiling, it felt like I’d just entered an underground dive exclusively reserved for the trendy people in town. Standing there, with my suitcase filled with teabags, a cat-print eye mask and my TOTALLY ironic ‘fluffy friends’ comfy pyjama top, I felt anything but trendy.

Posters of bands I’ve never heard of were blu-tacked to the walls, while the bar stocked bottles of alcohol I’d never seen in my life – and there wasn’t a teabag in sight. Saxophones and guitars were propped up around the room, giving it a grungy, heavy rocker theme. I felt like I’d just walked into the room of my best mate’s older brother, and was too uncool to even be breathing the same air as them. However, any worries I initially had melted away when we found our room. And not because it was desperately uncool or anything, but because it just reeked of homeliness. Continuing with its ‘Backstage’ theme, the bed’s headboard was made to look like those black boxes that transport all the vital equipment around for gigs, while the dressing table featured one of those mirrors you see in celebs’ dressing rooms. Even the lights hung off a mini lighting rig. I pretty much felt like Beyonce for the whole trip. Even though there were two of us staying there, we had three beds in our room, allowing us to spread out with our luggage. I took this opportunity to nab the single bed by the window, as I love a bit of fresh air at night.

Another note – one of the plugs on the dressing table took UK plugs. Perfect if you haven’t got an adaptable plug with you, or if it suddenly decides to stop working halfway through the holiday like ours! An iPod dock is also included so you can belt out cool, hip…Ariana Grande songs. The hotel offers private rooms holding up to five people, but the toilets and bathrooms are shared, with one shower per floor. This didn’t bother me at all – we never had to queue up and we barely saw another person in the hallway, despite the fact it was one of their busiest weekends of the year. Our room had a sink, plus mirrors and cups for our toothbrushes. Fluffy white towels were also provided. By far the best bit about our room, however, were the views outside our TWO windows. We had our own little balcony which looked out onto the Marnixstraat, while our second window overlooked the Leidsegracht canal. It was great because in the morning we were completely absorbed by the views, feeling like we were almost a part of this bustling city. The Backstage Hotel’s location is what really won us over. Sitting in the stunning Jordaan district, we were super close to the Vondelpark, the museums, such as the Van Gogh and Rijksmuseum, as well as the ‘Iamsterdam’ sign (for those must-have pics of you swinging off a random letter).

The Anne Frank museum is also a 15-minute walk away, and the Leidseplein square (with lots of restaurants) is just down the road where you can get a tram up towards the train station. Having spent three days flitting around the city from district to district, we found the Jordaan area was our absolute favourite – quiet, yet full of things to do. We booked quite a bit in advance, so two nights cost us around £105 each. You can probably find cheaper, but the Backstage Hotel offered both style and a good price.

The Backstage Hotel stole our heart for its prime location, reasonable price, and cosy beds. If you’re looking for somewhere in Amsterdam with character, this hotel has it in abundance. Just promise me you’ll leave your cringey pyjama tops at home.

What do you think of the Backstage Hotel? Have you ever stayed somewhere that you felt was just way too cool for you?