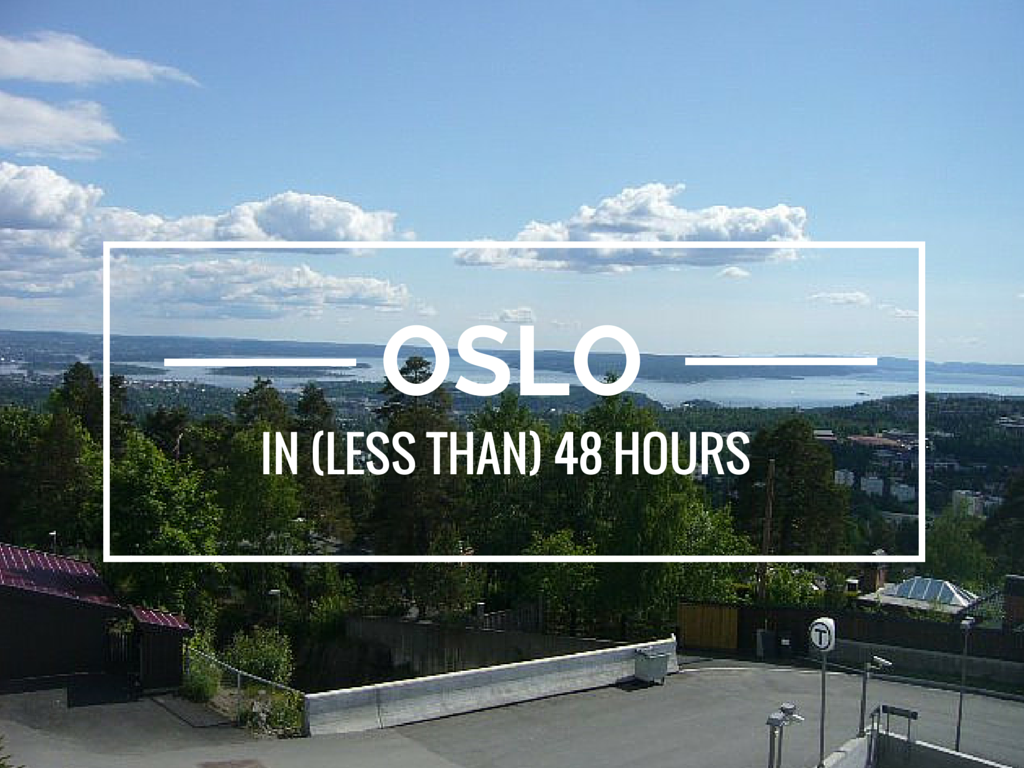 When I told people I was going to Oslo for 48 hours, most of them laughed.  I couldn’t blame them. Seeing one city in less than 2 days is possibly the most ambitious task I’ve ever set myself. Armed with my map, luggage and best friend (Sophie of Luggage Tags and Ticket Stubs) I arrived at Oslo Rygge airport at midday, with a return flight booked for the next day at 10pm. Could we make the most of our fleeting trip to Oslo?

Deciding What to See

According to Visit Oslo, some of the top sights to see include:

We decided to use this as our basis and embellish our plan with lots of random walks around the city to make the most of our 48 hours. Before we left, I decided to get creative and plot the main sites on the Metro so we knew where to go. This allowed me to get an idea of which sites were in which area, ensuring we didn’t miss anything while we were walking around. How Did We Get There?

Seeing as we were trying to make our trip as easy on the wallet as possible, we decided this was one for Ryanair. We managed to snap up return flights for £40 – granted it drops you off “in the middle of nowhere” (as the pilot himself announced as we touched down at Oslo Rygge) but hey. Did I mention it only cost £40?!

Where Did We Stay?

We booked in advance to stay at the Best Western Kampen Apartment Hotel which was located a short walk from the Oslo Opera House. We paid NOK 779 for one night (around £67 for two of us), which included breakfast. All in all, return flights and a one night stay in the hotel cost £75.50 each. Our day started at this building: recognise it? The Oslo Opera House is easily one of the most iconic buildings in Norway, so we couldn’t let our trip pass without a visit. Built out of Italian marble and white granite, you may need to bring your sunglasses along to protect yourself from the building’s glare. It’s a great place to hang out and chill (and even enjoy a picnic!). Sadly, we didn’t have time to hang about as we had to get to our next destination… We followed the harbour round until we came to the main area where City Hall is situated. Each December 10th, the Nobel Peace Prize ceremony takes place here, with Barack Obama and Sir Desmond Tutu being just two of the recipients! (We had a brief ‘Obama-was-here’ squee and then moved on.) Adjacent to the City Hall is the Nobel Peace Center where we picked up chocolate medals and Obama bookmarks.

By this point, we decided the early morning was catching up with us, so we took a 2 hour cruise round the Oslo fjords. This was potentially the best thing we did all day – as we stepped on board the boat, we were handed blankets and told hot chocolate was available. Result. We didn’t even mind that the Oslo ‘fjords’ were, well, not as exciting as we expected… Not quite ‘fjords’ but the summer houses were beautiful to look at!

We emerged from our Fjord trek slightly confused as to what we’d actually seen, but excited nonetheless for the rest of the day. We headed up towards the National Theater when we heard people shouting and running.

We had absolutely no idea what all the commotion was about, but I jokingly said to Sophie “Wouldn’t it be funny if it was a local celebrity?!” Upon further examination, we realised it wasn’t a local celebrity.

It was, in fact, a guy pretty much known all around the world for his athletic prowess.

We’d only just gone and walked into bloomin’ Usain Bolt!

We grabbed our cameras, our bags and our water and ran across the square to follow the hoards of paparazzi following the Great Bolt around. It turns out he was in the city to start off a Race Against Malaria race – what a fluke! Yes this is the fastest man on earth. In Oslo. Within touching distance of us.

After our brush with stardom, we followed Karl Johans Gate up to the Royal Palace. Unlike Buckingham Palace, visitors are welcome to walk up to the building and even around the back garden! (Of course there are guards keeping watch, so don’t try and get a free bed for the night…) The average visitor couldn’t get this close to Buckingham Palace (without getting arrested and slapped with a restraining order.)

By this time, we were getting peckish so feasted on a substantial meal at Hard Rock Cafe (where we sat in silence as we welcomed WiFi back into our lives.) Afterwards, we returned to our hotel and fell asleep whilst watching BBC World News.

Breakfast was a bit of a washout as we managed to almost burn the hotel down whilst using the waffle machine. Several stolen rolls later and our bags packed up, we left the hotel for our first stop of the day: Norway’s most popular attraction, Vigeland Sculpture Park! The Sculpture Arrangement was opened in 1940 to the general public, and now contains 212 sculptures of humans in various poses. Fun fact: The sculpture park is the world’s largest made by a single artist. That’s a lot of chiselling. We stopped for a while to enjoy the sunshine and eat our stolen hotel rolls…

…but not for long, as we were soon on the move again. We hopped on the Oslo Metro up to Holmenkollen which potentially offers the best views over Oslo. Oslo in all its glory

The reason we made the trek out of the main city? We’d heard impressive – and startling – things about the Holmenkollen Ski Jump. With a hill size of HS134 (I have no idea what that means but, believe me, it’s steep) we wanted to marvel at its impressive architecture and complain about how anyone who goes down there is clearly insane. The ski jump – you just wouldn’t, would you? (Image from topboxdesign.com)

A brief visit to the museum shop (as we couldn’t afford anything) followed, before we made our way back to the city centre to catch our bus back to the airport for our return flight home.

Although we only spent around £75 each on flights and accommodation, if we had stayed there any longer we would have had to have sold an organ. Each.

Despite our visit to the Hard Rock Cafe, we spent the rest of the 48 hours eating at McDonalds, where a fillet o fish meal came to £10 – in the UK this is just a smidge over £3.00.

I also picked up 5 postcards which came to..(takes deep breath to maintain composure) £5. I still can’t believe I spent £5 on 5 postcards. By the time I’d got to the till and the man had packed them up, I felt too embarrassed to walk off, so just stared wide eyed and quietly sobbed outside to Sophie. They weren’t even particularly  nice.

Overall, for the two days we were there I didn’t get much change out of £200…

How did we do?

I don’t think we did too badly. Sure, we didn’t manage to see everything Oslo has to offer, but we managed to fit in a good combination of planned and spontaneous activities whilst soaking up the Norwegian culture. Part of this was due to the fact the city is just so accessible. Mostly everything is within walking distance so you can easily tick off a sizeable chunk of your itinerary in just one afternoon!

Have you been to Oslo? What was your impression of it?