Have You Seen These Alternative New York Sights? 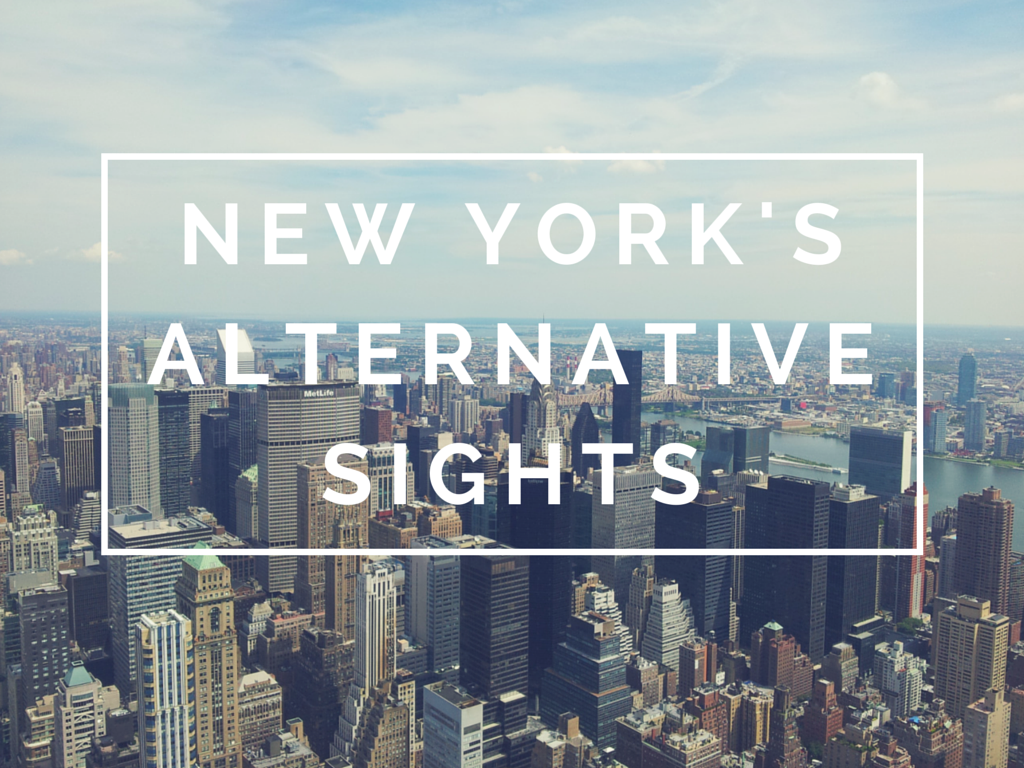 Times Square, Central Park, the Empire State Building – you all know the top New York attractions. But then again, so does everybody else.

The main sights are popular for a reason, and therefore it’s hardly surprising that they’re almost always packed with tourists. Of course, on  my trip to the Big Apple in 2012, I was just one of thousands of people every day vying for that golden shot of the Statue of Liberty, Brooklyn Bridge and Grand Central Terminal, amongst all the other sights that make New York such a popular year-round tourist destination.

But there is an alternative side to New York – places that don’t quite get the recognition they deserve, yet still offer oodles of American sass, sightseeing potential and history.

Here are some alternative sights that may not have popped up on your radar, but are definitely worth a glance on your next trip Stateside. While Central Park remains unbeatable in my eyes for the title of ‘My favourite park’ (seriously, I give medals out and everything), there was one other park I fell in love with in New York.

Bryant Park is a 9 acre public area in the heart of the city, towered over by the New York public library. Despite being surrounded by trees, it’s pretty impossible to forget exactly where you are, with skyscrapers peering over. Just a short walk away from citizenM’s funky and central New York hotel, Bryant Park is a peaceful oasis where you can eat lunch on the picnic tables, admire the surrounding architecture, sunbathe on the Great Lawn, or even play a game of chess. Granted these two are pretty much at opposite ends of the shopping spectrum, but next time you’re in the Big Apple, consider taking a trip to the fun and lively aisles of Dylan’s Candy Bar. I didn’t buy anything in either shop, but my inner-child was placated with hours of sifting through Dylan’s Candy Bar’s novelty, retro and American sweets. It’s a sweet shop like no other, and you truly feel like you’ve been caught up in some sort of Willy Wonka chocolate factory magic.

As well as having a flagship store in New York, Dylan’s also has stores in other US cities, including LA – will definitely be heading there when I visit in November! If you like the Museum of Modern Art (MoMA)…

Now, I really enjoyed visiting the MoMA, but had I known about the Intrepid Sea, Air & Space Museum while I was over there, I would have headed straight for the latter.

True, so many rave about the MoMA that it’s got to be doing something right. But after reading my friend Sophie’s (of Luggage Tags and Ticket Stubs) review of the Intrepid, there’s no doubt in my mind which is more up my street. I mean, at the Sea, Air & Space Museum you can get on-board a real-life Concorde! What more could you possibly want? Extra Tip: Consider purchasing a New York CityPass which gives you discounted entry to top attractions in the city, including the Intrepid Sea, Air & Space Museum, and the Empire State Building.

However, on a superhero walking tour of the city, our tour guide quickly took us inside the ground floor of the Chrysler, giving us an up-close view of its elegant and elaborate interior. This little peak inside reconfirmed why the Chrysler Building is my favourite building! Are there any alternative New York sights you would add to this list?

This post is in collaboration with citizenM, who have design-led hotels in Glasgow, London, New York, Amsterdam, Rotterdam and Paris.

Of course, all opinions (and my obsession with New York) are my own.