A Foodie Retreat at The Black Swan, Helmsley 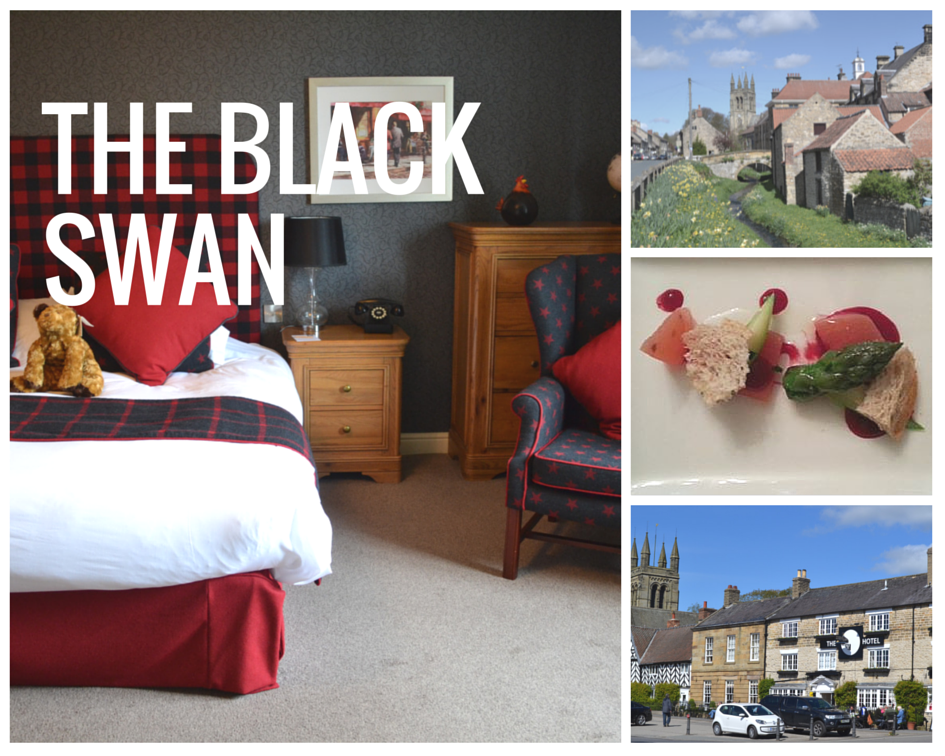 My invite to The Black Swan couldn’t have come at a better time. Not only was I feeling a little bogged down with work, I felt like I was in need of a big, long sleep. It was also a happy coincidence when I found out the hotel was based in Helmsley, a town I’ve heard a lot about over my lifetime but have never actually visited. Y’see, that’s where a family friend used to live, and he had always spoken fondly about his little slice of Yorkshire.

And then I saw the hotel itself – and boy, was I sold. Full of charm and character, the hotel is slap bang in the middle of the town’s bustling market place. Not only are cosy open fires, oak beams and a picturesque garden just some of the features, the hotel even has its own tearoom attached!

Made up of three separate houses, the hotel features a Georgian house in the middle, as well as a black and white Tudor-esque house to its left. And then on the right hand side you’ve got an Elizabethan building which stands on the site where an inn is believed to have been situated for several centuries. With The Black Swan, you’re not just in Yorkshire, you’re practically in Olde England. Perched on the Southern edge of the North York Moors National Park, Helmsley is a small market town in North Yorkshire. It’s easily reached from Scarborough and York, while trains whisk Londoners up to Thirsk, after which it’s a 14-mile taxi drive to The Black Swan’s front door. Situated in the garden wing of the hotel, my room was bursting with modern amenities, cosy cushions and a flourish of colour. It’s fair to say that these superior rooms aren’t maybe as visually striking as the feature bedrooms in the oldest part of the hotel, but they’re spacious, clean and extra comfy, so no complaints from me here!

It’s the little touches that really set this hotel apart from other places I’ve been to. An adoptable teddy sits on your bed waiting for you to take him home (for a fee, I hasten to add – although I totally would have given him a home if I had room for him in my bag…), while the room also includes a chess board, comfy armchair, an iPod docking system and even a sofa. I can totally see why this hotel has a reputation for being a romantic bolthole – why would you want to leave your room when you have all this comfort at your disposal?!

After my evening meal it was a delight to come back up and find the curtains had been drawn, the pillows had been moved, and the side lamps were on. This ‘turn-down’ service, albeit a subtle little feature, really gets you ready for climbing into the bed and floating off into dream land. The en suite facilities cater for all desires, whether you’re a shower-and-go kinda person, or of the ‘lay horizontal in the bath for a few hours’ persuasion like me. Complimentary toiletries are included, while the front desk were even able to help me out with a toothbrush when I realised I had left mine at home! One of the best bits about the stay was the breakfast which was delivered to my room in the morning. The hotel offers this service free of charge and I figured it would mean even more time in bed! All you have to do is fill out a little form with your preferred time and breakfast items and hang it on your door handle the night before. The next morning, simply await the arrival of your tasty food, knowing full well that nobody’s going to judge you while you tuck into the equivalent of three breakfasts in your pyjamas. And now for the real highlight of the stay – the incredible food on the set menu!

The three AA rosettes of the hotel’s Gallery Restaurant was evident throughout the meal – all seven courses of it! I was incredibly impressed that they had a complete vegetarian menu to hand.

At times I felt the dishes were a little too reliant on asparagus, but it barely mattered when you had such small dishes, bursting with flavour. As well as being lovingly laid out, each dish introduced me to new ingredients that I’d never really considered before (to say I’m a fussy eater is a bit of an understatement…). One of the waiters told me that the hotel had recently taken on a new chef (award-winning Patrick Bardoulet for the big foodies among you) who likes to mix up different seasonal ingredients.

To give you some sort of idea of what to expect when you visit, here are all seven courses I had: Just looking at the pictures again makes me break out in a bit of a drool.

The waiters were very keen to tell me not to worry if I couldn’t finish all the dishes as some people can feel it’s all a bit overwhelming. I finished them all. I even had a bit of room left to spare at the end – not enough to opt for the optional cheese board, but I did consider it. Although it felt like there were a lot of different dishes, there was a sufficient enough time between each so that I could enjoy them without feeling too full.

Of the dishes, it’s tricky to pick my favourite, although I did enjoy the curried carrot and butter bean velouté much more than I thought I would. And that dessert has made pistachio ice-cream my new favourite food. Possibly ever.

Helmsley is just like one of those small, quaint towns your imagination conjures up when you think of a rural, English settlement. Seemingly untouched by time, almost like it’s in its own little void away from everything else, the town marries together cute stone houses with rolling fields, local shops that look like they’ve been there for decades, and even a picturesque little stream. If there’s one thing you do take with you to Helmsley, make sure it’s your camera. You’ll be stopping every few minutes to take picture-postcard snaps of all corners of the town.

There’s also lots to keep big and little kids entertained. As well as an abundance of tea rooms, you have arts and crafts shops and even a castle! Were there any bad points?

There isn’t anything I can fault about the hotel staff – particularly the waiters – who were efficient, chatty and welcoming.

The only gripes I have include small things such as the fact there wasn’t a plug socket near the bed (yeah, I know, poor me, I can’t browse the internet on my phone while I’m in bed watching TV. Such a stupid thing to moan about.) I also wasn’t overly fond of all the hunting regalia on show, but I understand that that’s kind of what you’ve got to expect in the countryside.

Of course, the only big thing I have to mention is the fact that it’s around 14 miles from the nearest train station. The taxi from Thirsk train station to the hotel cost me £32 each way – which wouldn’t be too bad if you were sharing the fare with someone else, but it’s something to consider.

All-in-all, The Black Swan and Helmsley is the epitome of cosiness, and easy to access from London and other parts of the UK. Grab your slipper socks, your camera and a good appetite, and indulge in the wondrous Northern hospitality.