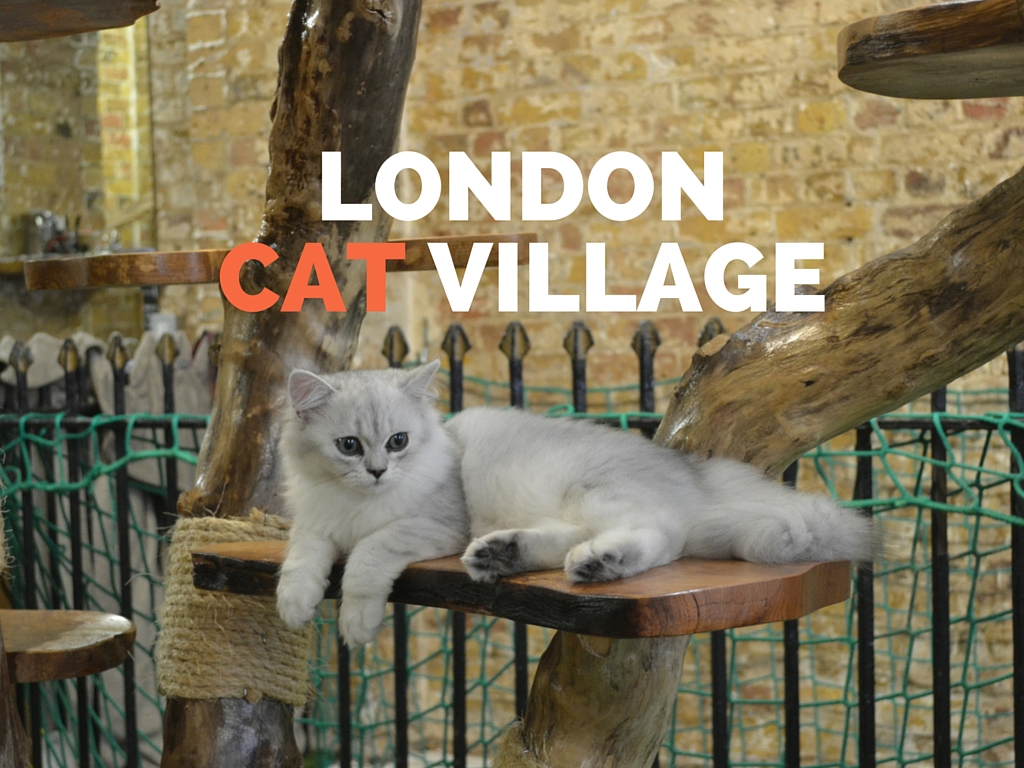 When Lady Dinah’s Cat Emporium opened in East London early last year, it was impossible to get a booking for months. Even today, 17 months after it opened, it’s still virtually impossible to get a weekend or evening booking, which sucks for us full-timers.

So wouldn’t it be great if there was a cat cafe where we could pop in as and when? A cat cafe so quiet you’re not vying for the attention of cats alongside half of London?

I’m going to let you into a little secret: there is such a place. And it’s called London’s Cat Village.

While summoning up visions of tiny cat houses dotted around a criss-cross of roads, London’s Cat Village is actually a forest-themed cat cafe located down a street art-ridden road near Old Street tube station. It’s only been open around a month, and when I went in it was almost empty!

And….why am I still talking? Here’s what you really want to see: cat pictures! (I actually gasped and almost cried a bit at this kitten’s beauty/softness:) Many of the cats are barely a year old, so now is a fantastic time to go. They’re still in that youthful, kitten stage, so you’re bound to find at least one who fancies a little playtime.

Similar rules from Lady Dinah’s are still in place – such as not picking up cats – so the feline’s welfare is at the forefront of the business. There are also plenty of climbing frames around to keep cats entertained, as well as giving them a place to escape to when they’re tired of constant customers.

One of the things I loved about the London Cat Village was the fact that every customer has to leave their shoes at the front door. Everyone’s got the option to don a pair of fancy slippers, or else you can just walk around in your socks. It’s a cosy, inviting atmosphere, almost like you’re in your own front room…albeit one filled with cats.

A one-hour booking costs £5 per person to secure. Once you’re there, you can opt for something to eat or drink. While the menu is, at the time of writing, quite limited, it’s relatively affordable, and it’s good for a little snack – everything from sandwiches to cake and ice cream, with hot and cold drinks available too.

One thing I would definitely recommend is the lemon cake, artistically served on a slate plate with a side of cream. Oh, but make sure to keep an eye on whatever you order, otherwise the cats will make a go for it…something we found out within around 5 seconds of our food arriving. With an upstairs and a downstairs, cats (and guests) have space to move around. With netting, beanbags, scratch posts, toys and little shelves dotted around, there’s plenty to keep the cats amused.

One of the cafe cats had recently given birth, so it was lovely to see that the kittens were kept close to her downstairs in a small play pen. Located away from the other cafe cats, the covered-up pen allows the mummy cat to be with her babies when she wanted, while also allowing her to step out for a breath of fresh air when she wanted. A member of staff told me that they they hoped the kittens would be able to join the London Cat Village fold when they’re a bit older, but if not they won’t be short of offers for people to take them off their hands! [Cannot deal with so much cuteness]

The cafe was set up as a place for cat lovers to indulge in a flurry of feline snuggles in a homely, stress-free environment.

But the story goes much deeper than that – and it’s an incredibly heart-warming one.

Just over two years ago, the cafe’s owner was diagnosed with depression as a result of stress. He and his wife found that watching funny cat videos online helped with his depression, and so the next logical step was to get their own cat! As the husband started to feel better in himself, he and his wife figured that opening their own cat cafe would provide people with a space to unwind and relax in the company of kitties. London Cat Village is a little more rough-around-the-edges than Lady Dinah’s, which is not necessarily a bad thing. My boyfriend, who – bless him – has been dragged along to both places, much prefers the London Cat Village as it seems much more chilled back.

However, the London Cat Village is, in its own right, a wonderfully cosy, homely and friendly place to while away an hour or so. As with any recently opened business, there are a few issues that need ironing out, but the cats seem to be in their element – which, at the end of the day, is by far the most important thing.

Have you been to London Cat Village yet? Would you like to?