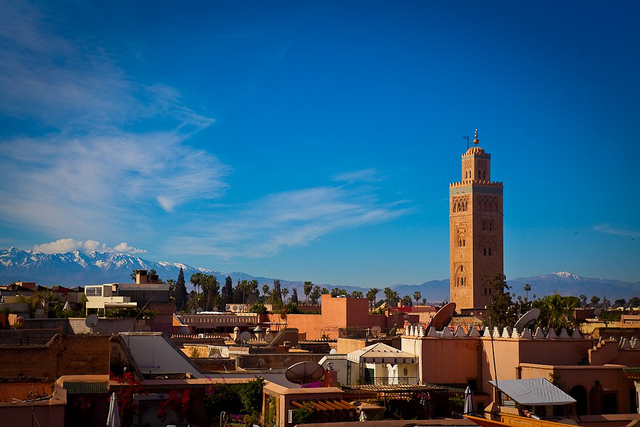 When January comes round, I always feel an intense rush of excitement. With a blank diary in front of me, I feel like the whole world is my oyster. Well, until I look at my post-Christmas bank account and have a serious reality check.

Unlike other years, however, my travel plans are already well underway. For once, I’ve actually already got a few little trips booked, and there are a fair few more that have been spoken about but not yet set in stone. Of course, this time last year I had no idea that 2015 would bring me a two-week trip around America, as well as a week in Paphos, so I’m very conscious of not booking myself up too much in case something exciting comes up! For now here are my vague plans for 2016: Copenhagen will be my first trip of the year, as well as my first new country of 2016. After dropping less-than-subtle hints to my boyfriend for months now, we’ve decided to bite the bullet and head to Copenhagen for a weekend to celebrate Valentine’s Day. We found a really cheap deal and a gorgeous boutique hotel, which I’m almost looking forward to more than the city itself!

After my hectic trip to Oslo for 48 hours I vowed never to do something so rushed again. But after hearing from my friend how accessible Copenhagen is from the airport (a 12-minute train ride away, no less!), I’m actually looking forward to it. Plus, The Travel Hack‘s gorgeous photos from her weekend in Copenhagen during February has convinced me that this will be a perfect time to head out there with the camera! This has become a bit of running joke with my friends. I’ve been talking of going to Marrakesh for so long that whenever I bring it up they’re always like “…you still haven’t gone?!” In 2015 I almost went after being invited on a press trip, but unfortunately I didn’t have any annual leave left. So I reckon 2016 is the year to make this one finally happen. And what better excuse do I need than my 25th birthday in March? Deals are relatively affordable, and it’ll be a welcome few days of sunshine and colour. I’m the first to admit that in 2015 I didn’t really make the most of my bank holidays, which is an essential if you are limited with annual leave. The problem is, that so many people have the same idea about going away during bank holidays, that you really need to book months in advance in order to get a good deal. This is something you think would be easy enough, but when you’re as indecisive as me, this is often easier said than done. So, for 2016, I’ve got ahead of the game and actually booked up a trip to Monaco for one of the May bank holidays! Can’t wait for three days of sun, casinos and a smattering of luxury! I’m not one for making traditional New Year Resolutions…mainly because it’s pretty unheard of for me to keep them beyond the 1st January. Who needs the year to start off with a shed-load of negativity, eh? But when booking my trip to West America last year, I promised myself that I would try and tick off one of my ‘dream’ holidays every year. Could 2016 be the year I finally get to explore Dubai? I almost went in 2013, but my friend and I opted for a week in Iceland instead (yeah, I know, you could hardly find anywhere more different…). But Dubai, with its old souks, beautiful beaches and its unbelievable opulence, has never left my mind. Plus, with its proximity to Oman and Abu Dhabi, it would be a good way to tick off more than one destination in one go. Cancun is just full of Americans on spring break, right? Well, not if you time it well. And The Travelista‘s posts on Cancun have got me thinking it might be time to finally pay this area a visit. I’ve wanted to visit the Caribbean for a long, long time, and the Mexican coast seems like a fair trade for now. I’ve been to New York in the height of summer, but to experience the Big Apple in the middle of Christmas remains one of my childhood dreams. Ever since I was little I’ve dreamed of ice skating on the ice rinks in Central Park and outside the Rockefeller Center. I’ve dreamed of hugging that gigantically gorgeous piece of Christmas foliage outside the Rockefeller Center too, but I doubt I’d be able to get that close without getting arrested. My friend and I have spoken about taking a trip Stateside for Thanksgiving, so maybe this could be the year my childhood dreams do come true! Almost went to Dubrovnik and Split (on two separate occasions!) last year, but those plans got derailed thanks to finding a cheap deal for America and, uh, my redundancy. But it’s actually worked out much better this way, as I’ve *finally* become absolutely obsessed with Game of Thrones – and if we go out to Croatia this year we can get acquainted with the city via various GoT tours! This is one trip I’m seriously crossing my fingers for this year.

WEEKEND TRIPS IN THE UK I’ve always got my eye on taking shorter weekend trips around the UK. So far, I’ve got a short trip to Brighton planned for April, and a day up in Northampton in January, but that’s as far as it goes. Where else could I visit this year? The Cotswolds? The Lake District? Cornwall, finally?

Now it’s over to you! Where are you planning to go in 2016? Do you have any travel dreams you’re hoping to fulfil?