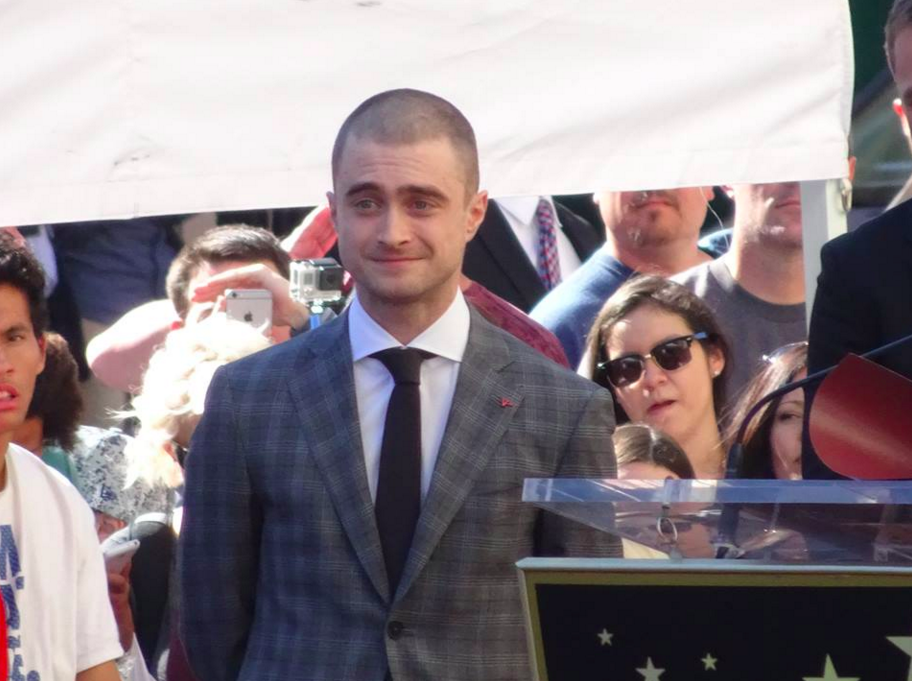 Los Angeles is well-known for its glitzy celeb scene, and nowhere is this more evident that on the Hollywood Walk of Fame. Granted, these celebs are represented by over 2,500 brass stars embedded into the pavement, but sometimes you might just get lucky and spot a real star for yourself.

We only had four nights and three whole days in LA, so we knew our chances of seeing a celebrity in the flesh was going to be almost impossible. But, at some point during my extensive Los Angeles research, I came across THIS site, detailing all the dates of upcoming star ceremonies on the Walk of Fame. I’ll be honest, half of the ‘celebrities’ on the list I didn’t actually know. But then I realised that on our very first day in Los Angeles, Daniel Radcliffe, aka HARRY POTTER, would be receiving his star! What were the chances?!

You could say – *puts sunglasses on* – that the stars aligned. OK, that was terrible. I’ll see myself out. As we were staying at the nearby USA Hollywood Hostel the night before, we figured we would be fine just walking past the general area just to catch a glimpse of Mr. Radcliffe.

The ceremony itself takes place just outside the Dolby Theatre, in a small area surrounded by barriers. The small stage on which the ceremony takes place is slightly raised – but so are all the TV cameras, angling for that perfect picture. To make matters worse, people start turning up ridiculously early, meaning that when we turned up about an hour before it all kicked off, the crowd was already half a dozen people deep. Not the busiest event ever, granted, but police were on standby to keep many onlookers moving on, especially as they were trying to keep the sidewalk flowing.

So, our initial plan thwarted, we opted for plan B: standing on the steps of the Hollywood and Highland Center, overlooking the ceremony itself. Although this meant we were further away and couldn’t really hear a thing, it did mean we were able to see most of what was going on! Bit of a trade-off, but we were cool with that.

This was our view (without a camera zoom): The ceremony kicked off with a small speech by Hollywood Chamber of Commerce President and CEO Leron Gubler (yep, totally had to look that one up. I had no idea). And then there were further speeches by Harry Potter director Christopher Columbus and @midnight host Chris Hardwick. All the while, Radcliffe stood to the side of the stage, occasionally glancing at his feet and giggling to the crowd who cheered literally every time someone said anything. Oh, to be an adored movie star… (And yes, it took us a while to actually realise that was Daniel Radcliffe. What did he do to his hair?!)

Before long, it was time for Daniel to take to the microphone himself, receive an official proclamation, and then have endless photos of him by his newly awarded star. It was all over rather quickly, but I was still stunned at how official it all seemed, even though it was all happening on a public sidewalk! (For the record, this is what we saw from where we were standing, without the camera zoom. Can you spot the Harry Potter?) Just for a bit of fun, we tried to get a drive-by photo of the Rad as we walked past the hoards of people. We got promptly told to move along, so we couldn’t stand anywhere. But I did manage to get this sneaky up-close pic: See what I mean about those pesky cameras getting in the way?

Things to Know For Upcoming Hollywood Walk of Fame Ceremonies

If you’re lucky enough to be in Los Angeles when there’s a big celebrity getting their Walk of Fame star, it’s pretty much a given that you’ve got to go to it, right?! Could you actually get anything more Hollywood?!

Below are some things you’ll need to know for any Hollywood Walk of Fame ceremonies: Think that’s about all: have you got any tips for star spotting at Hollywood Walk of Fame ceremonies?