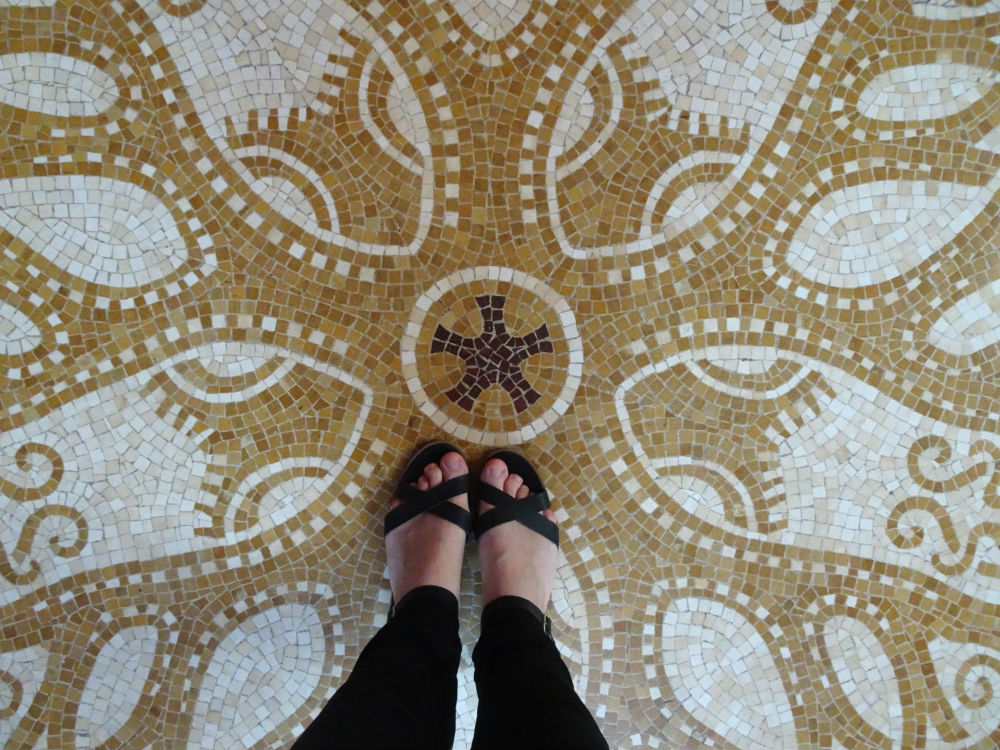 There are many things that stood out to me during my three days in Monaco: the over-abundance of cranes, the steep hills and the plethora of small, well-groomed dogs to name but a few.

But nothing stood out to me quite as much as the floors. Which was handy considering, well, that’s what they’re there for. To be stood on.

The floors, carpets, and pavements of Monaco were unlike anything I had seen before. Before long I began to realise that each thread and each tile lent themselves to a unique story of my long weekend in Monaco. What had started as a silly way for me to document some floral, colourful floor tiles quickly transpired into quirky photographic evidence of my (literal) footsteps over the three days. Have a look at the pictures I took and let me know: have you seen flooring like this on any of your travels?*

It had to begin somewhere, this photographic journey of my feet around Monaco.

And this is the picture that started it all off – my friend and I on our way to the Fairmont Hotel in our finest evening wear, and vibrant floor tiles on an outside staircase leading down towards the Casino. During the day we did a lot of walking. One of the best bits of the whole weekend was when we went to The Rock of Monaco, with its cobbled streets and colourful buildings. Of course, I only managed to get the cobbled streets in this picture 😉 We couldn’t not go to Cafe de Paris –Monaco’s premier brasserie – and not get photos of the floor. Obviously. Otherwise it would have just been a complete waste of time, right? While the floor of the main restaurant was relatively subdued compared to the tiles in the toilets, on closer inspection there’s actually a lot of shapes you can make out. It’s like clouds, just…shapes in the floor. Monte Carlo Casino is well known for its opulence which has attracted star names from all corners of the world for well over 150 years. Veer from room to room and you’ll find much the same set-up: casino tables, slot machines, bars. But take a look down and you’ll see something changing.

Each room in the Monte Carlo Casino has its very own carpet, which in turn gives them a distinct personality. Floral patterns were obviously the preferred motifs of the time since every design featured them in some form or another. But the striking colours and symmetrical colours are enough to make them stand well apart from each other. Strictly speaking, while this picture wasn’t taken in Monaco I was more than impressed by the way the floor theme followed me back to England. This map of London is printed on the floor of Gatwick airport’s North Terminal – and what better way to round up my Monaco adventure! Coming up – Posts on how to make the most of a weekend in Monaco (without breaking the bank), and reasons why Monaco should be your next destination!