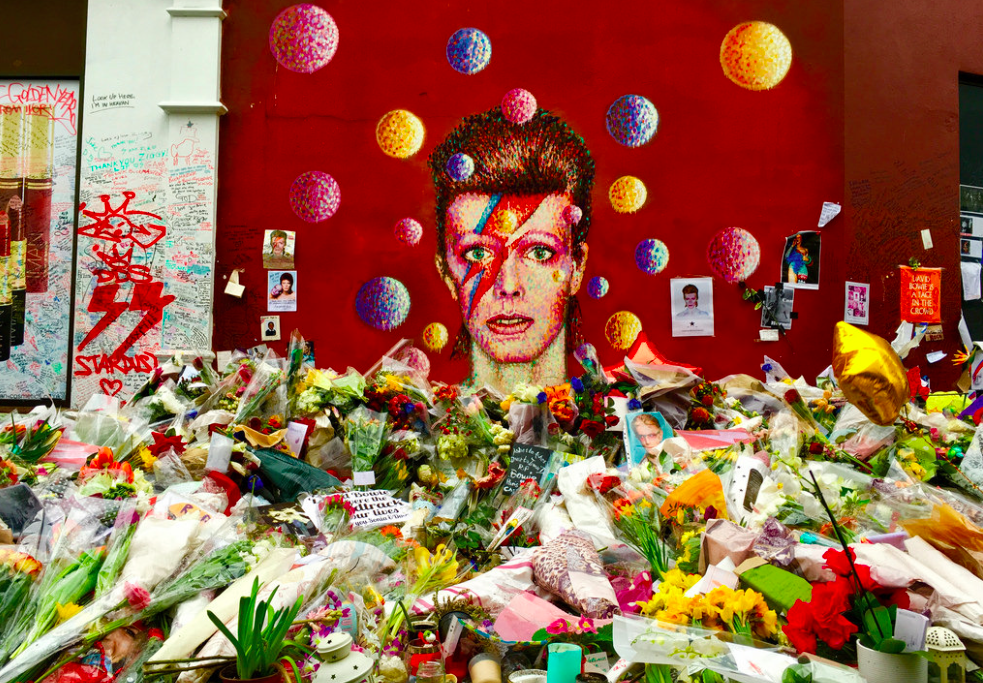 Of all the celebrity deaths in 2016, it was undoubtedly David Bowie’s that got to me the most. Having grown up in a household where Space Oddity, Ashes to Ashes and Ziggy Stardust were played on repeat from dawn until dusk, Bowie was almost like the silent family member who everybody spoke about but who just never bothered turning up to our birthdays, Christmases and special occasions. Forgivable, really, when you’re an international musical icon, I guess.

While January 10th 2017 marks the first anniversary of Bowie’s death after an 18-month secret battle with cancer, the mood in London has been surprisingly chipper. As far as his fans are concerned, this anniversary is a reason to celebrate rather than mourn; to remember the Starman for what he did best – creating music that transcended both generations and genres. (Image from Google Maps, because mine turned out dire)

Celebration was definitely the order of the day at The London Jazz Cafe in Camden. It’s not a place I’ve ever been to before, but the idea of remembering the Starman in a jazz cafe with an orchestra sounded like a fitting tribute. Despite its Art Deco-meets-industrial theme, the venue is only a smidge over 25 years old. Its been credited with bringing some of the biggest names in the world to Camden (including Amy Winehouse and Adele), but it remains an intimate venue with a maximum capacity of just 440. My favourite thing about the venue is the fact it’s split over two levels; the downstairs where it’s purely standing room only, and upstairs for a guaranteed good view, seat and meal. Naturally the latter comes with a price tag to match, but I can totally imagine it would be worth it for a special occasion. Of course, with Ian and I being the cheapskates we are, we ended up downstairs. But for tickets that cost just £10 each (plus easy access to the bar), we were happy, and it got us right in amongst all the action. (Soz, blurry ‘cos it was dark)

Kicking off with the rousing beat of Let’s Dance, the 9-piece orchestra meandered their way through much of Bowie’s extensive back-catalogue, from his era-defining 70s tracks right through to the more haunting tracks from his latest album. With two female lead singers, it did take a song or two for our ears to settle in – although, saying that, no one can rival Bowie’s distinctive twang, so it would have been the same no matter who was up there. The singers did Bowie proud though, not backing down from attacking Bowie’s greatest hits with passion and more than a little touch of rock and roll.

Over the course of the orchestra’s two acts (with a little break in-between), we all lapped up the greatest hits, each with a unique twist, like a solo riff or a seamless segue into yet another track. Pretty much every single song turned into a singalong, though, which was to be expected. After all, how can you listen to Bowie and NOT sing along?! Thankfully, however, they missed out some of Bowie’s, um, lesser favoured contributions to music *cough* Dancing in The Street *cough*, so we didn’t have to try bring forth those lyrics from the deeper recesses of our minds. By far the most stirring moment of the night, though, was when the orchestra played Space Oddity, one of Bowie’s most classic songs from the earlier part of his career. As the opening riff began, echoes of shushing filled the venue and everyone fell silent. That collective appreciation of a 400+ crowd and that stillness within the room was enough to send shivers down my spine. If all the above sounds like something that would be up your street, then, hurrah, you’re in luck! There’s a third gig taking place on Sunday 15th January which looks like it still has some tickets available. If you’re reading this after that date, then don’t fret. Having seen the success of the event first-hand, plus the ardent passion that Bowie’s fans have, I see no reason why the London Jazz Cafe shouldn’t make this a regular thing!