How to travel from Los Angeles to San Francisco by Train 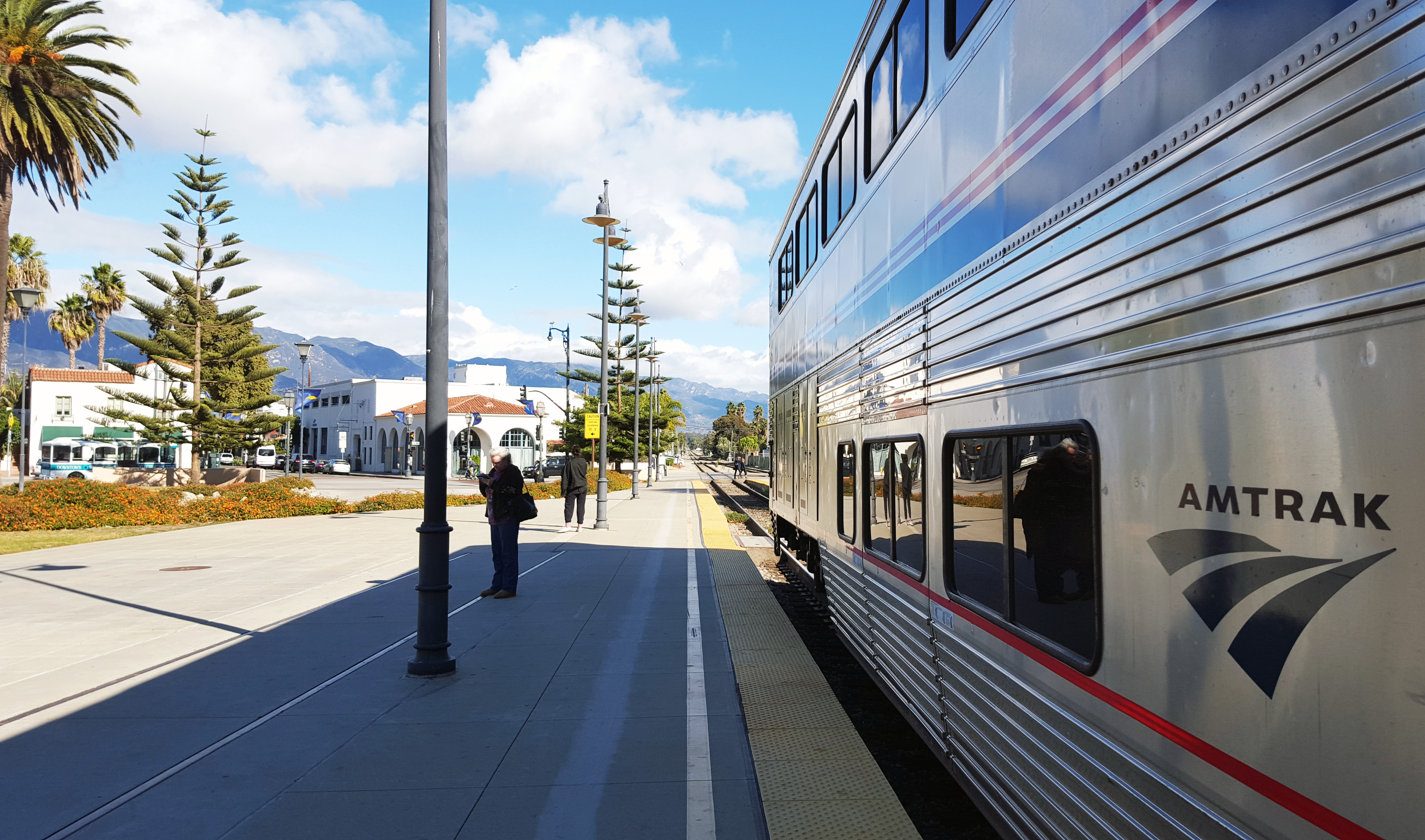 You could fly or drive between LA and San Francisco. But if you (or your mates) don’t drive and you’ve got some time to spare, I cannot recommend taking the Coast Starlight train enough.

The Coast Starlight train runs 1,377 miles from LA all the way up to Seattle. If you were to take this whole journey it would take 35 hours!

The route hugs the West Coast, so you’ll be treated to plenty of sea views and mountainous terrain. It’s the kind of journey that makes you want to stay awake the entire time so that you can soak up every last passing scene.

If you’re considering doing Los Angeles to San Francisco by train – great choice! I hope I can answer some of your questions. Feel free to read the whole post, or jump to a particular section. As always, if you have any questions, please leave me a comment and I’ll get back to you as soon as I can.

How long is the train ride from Los Angeles to San Francisco?

The train ride from Los Angeles to San Francisco on Coast Starlight takes around 12 hours – give or take.

You’ll pass several stops along the way including Santa Barbara and San Jose. You might even decide to do the journey in several stages, allowing you to enjoy a day or two at certain stops. The LA to San Francisco train isn’t direct though, so you’ll have to add on extra time once you arrive at Emeryville station – that’s the closest train station to San Francisco.

Emeryville sits on the other side of the bay, around 11 miles from San Francisco itself (the journey will take you over San Francisco – Oakland Bay Bridge).

How do I get from Emeryville station to San Francisco?

There are multiple ways to get over to San Francisco from Emeryville station:

Like I said, we took a taxi because we arrived at gone 10pm. It was pitch black, nothing was open and we just wanted a direct trip to our hotel. We didn’t feel at all comfortable in the taxi and we were charged $90 in the end for the 20-minute journey! If we had arrived during daylight hours we might have felt more comfortable taking the bus ourselves (and saving some money in the process).

One thing to bear in mind though: from what we heard, the Coast Starlight train often experiences delays, so if you are hoping to catch one of the last buses of the day it’s worth having a back-up plan just in case you miss it: e.g. the Uber app downloaded to your phone. For safety’s sake.

Where is the train station in LA?

The train station in Los Angeles is really central: Union Station is located in Downtown LA, and can be easily reached via Uber. (Top tip: if your LA hotel is nearby, see if it offers a complimentary shuttle service to the station. Many do!)

Union Station is HUGE. It has all the facilities you could want, including cafes, restaurants and toilets. Free monthly tours taking in the surrounding art and architecture are also available if that’s your kinda thing! Do I need to book in advance?

I booked our train tickets five months in advance on the Amtrak website, as soon as I knew what our itinerary was looking like. I’m recommend booking in advance, especially if you’re travelling on a tight schedule.

How much does it cost?

Two regular coach seats set us back $122 (around £94) each, which isn’t too bad considering you’re getting ring-side seats to some of the best scenery in the US.

However, taking a look at the Amtrak website now, you can get coach (i.e. the cheapest tickets) from around $54 per person. This is a saver ticket, so it’s non-refundable and no changes are allowed – but if you’re sure of your journey, there are some good bargains to be found.

Can you book a sleeping compartment?

Yes! For those who want a bit more privacy, you can book a roomette (with beds/no bathroom), a family bedroom (for two adults/two children) or a bedroom (for two people – comes with in-room restroom, sink and shower). Expect to pay anywhere between $200 and $600 for the room.

As there are no shower facilities for those travelling by coach, I’d say booking a sleeping compartment might be good if you want to freshen up on the journey, or if you’re travelling with kids and want your own space.

Can I reserve a seat?

The Amtrak website lets you choose whether you want a seat on the upper or lower level, but that’s about it.

When we arrived at LA’s Union Station, we went to check-in with our luggage and the woman behind the counter assigned us our seats and physically crossed them off on a piece of paper. At this point you can ask for a certain seat, and if they can accommodate you they will.

If there’s one tip I can give you, it’s this: ask for seats on the left-hand side of the train if you’re travelling from LA to San Francisco (or the right-hand side if you’re travelling from San Francisco to LA). Both sides have dramatic scenery, but this is the side that’ll get you those all-important sea views. Luckily our carriage wasn’t that busy at all, so we could move around from seat to seat snapping endless photos on both sides. Can I take luggage on the train?

Before you hop on the train, you’ll need to check-in your luggage at your departing train station. We did this at Los Angeles’ Union Station, handing over our main pieces of luggage which were delivered to us safely on the platform at Emeryville station. I had a huge four-wheeler suitcase which weighed around 16kg and this was absolutely no problem.

You can also take your bike on the train journey too.

What can I expect to find on the train?

The Amtrak trains are amazing. The little train geek in me exploded with excitement when I saw the double-decker carriages emblazoned with the Amtrak logo. As well as seat plug sockets to charge up all our gadgets, our coach seats gave us shed-loads of room to move around in and stretch our legs. When you put the back down, it was virtually like being in your own bed! There were toilets downstairs, too, so no concerns about getting too lost or leaving your stuff unattended for too long. When we got on board, the train conductor ticked us off on her sheet, and she would regularly dip her head in and out of the carriage throughout the journey. That sense of having someone professional there really put us at ease, especially since there weren’t so many people on our carriage.

The Coast Starlight train isn’t currently on the list of trains that offers WiFi. However, there’s still plenty to keep you occupied throughout your journey. On the train you’ll find an Observation Carriage which boasts swing chairs and huge windows wrapped up into the ceiling. This did get fairly busy during our journey, so we didn’t spend too long here – and besides, we had a pretty perfect view from our reserved seats! The other carriage we spent a lot of time in was (surprise surprise) the dining car. It was open most of the trip, save for a few minutes when the guy had a break, and we were able to stock up on snacks, hot drinks and mini one-person pizzas. The couch-style seats with their own table gave us the perfect opportunity to sit down and play some card games with the odd coin as our wagers.

We may have been out of Las Vegas for a week or so, but Las Vegas certainly wasn’t out of us… One of the best things about this carriage is that it was a lot more sociable than the others. A guy saw us playing cards and started teaching us some new games – none that either of us can remember now, but definitely fun at the time. As for the rest of the journey? Well, we had a good 12 hours to kill, but that passed in a blink of an eye. Having no WiFi onboard was certainly not a problem, as it gave us time to unwind with writing, reading and watching shows on my iPad.

Oh, and of course, lots of staring out the window at those incredible views.

Since our carriage was the very last one, we also had a back window looking out onto the tracks. Perfect for those Instagram-worthy shots and videos. Can I get off the train?

With 10 stops between LA and Emeryville, there are plenty of opportunities to catch some fresh air. At the bigger named stops, the train stops for a good 10 minutes or so as the luggage is unloaded, giving passengers a chance to step off the train for a smoke or a stretch of the legs. Travelling on the Coast Starlight train was easily one of the biggest highlights of my entire West Coast US trip. Yes, it’s even on a par with seeing Britney in Vegas. Even though the journey itself was pretty long, I found myself wishing we were on it for even longer, even all the way up to Seattle! I’d love to return and do the whole route (either in one go or in stages), but until then I’ve got my eye on taking all kinds of train trips all over the world. Definitely got the train bug now… Have you ever taken the Coast Starlight train? What’s your view on train travel? Let me know in the comments below!