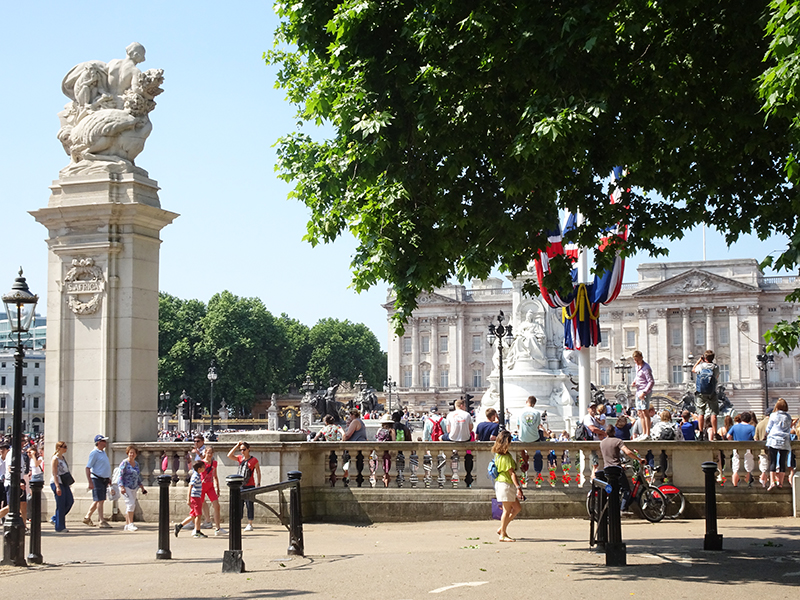 “So what exactly is the cycling etiquette around here?”

I’m helmeted up, on Blackfriars bridge and it’s only just occurred to me that I’ve never actually biked around London before. Every day I dodge out of cyclists’ way as I leg it across roads on my way to work, and I’m vaguely aware of the Boris Bikes lining the streets. But as for saddling up and getting my feet in the pedal? Nope. Never.

This sets the tone for my morning with Golden Tours: a complete day of firsts. The team behind the iconic tour company – well known for their open-top bus rides around the capital – invited me to try out one of their cycling tours, a new venture they’re launching in 2017. Their Royal Parks and Palaces Tour takes in all the regal parts of London, including Buckingham Palace, Kensington Palace and Diana’s memorial. And, rather shamefully, despite living in/around London for 26 years, I’ve never ever seen half the sights on the itinerary. See what I mean about a day of firsts? What Do You See on the Royal Parks and Palaces Tour?

After gearing up for my ride at Golden Tour’s HQ (currently outside Waterloo station, just across from the London Eye), I was introduced to my guide, Dave. I’m of the opinion that tours are only ever as good as their tour guide, so I was relieved to find that Dave was an absolute gem – friendly, personable, and a fountain of interesting, historical factoids. He even offered us the chance to stop and get an ice cream on our way round, because fatty over here was eyeing them up for a good portion of the tour 👀

So where did we go? Well, according to Google Maps we cycled around 10 miles in three hours, which gives you an idea of just how much we saw!

I don’t want to ruin any of the surprises for you, but here’s a list of what you can expect to see on the Royal Parks and Palaces Tour: I had several highlights throughout the three hours. The first was finally seeing the Changing of the Guard from a distance at Buckingham Palace. Even though it was completely touristy, I felt a wave of pride and patriotism as I saw all the visitors twisting and turning for the best view. It’s times like these that you forget just how much London has to offer. Hearing about Winston Churchill and his statue in Parliament Square was also another highlight. For instance, did you know that Churchill personally requested his statue be built facing the House of Commons, the building that had almost become a second home for him throughout his life? Another fun fact: an electric current is passed through the statue in a bid to deter pigeons. Now you know why that statue always looks so clean! I also loved cycling around Hyde Park, especially when it came to being beside the water of the The Serpentine. I must admit, spending more time in Hyde Park has been on my ‘to do’ list for years, so it was a great opportunity to see just how much is on offer around there. I mean, can you believe that there are views like this in Central London?! I was surprisingly absolutely fine with cycling on the roads. My guide took extremely good care of me, going ahead to clear the way with a ring of his bicycle bell, and working in frequent stops so the pace was as relaxed as it could possibly be.

Why Choose a Cycling Tour With Golden Tours?

Let’s face it: cycling tours aren’t an overly new phenomenon, especially in London. At the time of writing, Golden Tours’ cycling tours have only been running for around 2 months so it’s all a very new area for them. But one of their great USPs is the opportunity to use electric bikes (for a £10 upgrade). That takes much of the struggle out of a 3 hour ride, even though the route is predominantly flat. It gives the bikes an extra kick from the battery-powered engine, which can be easily adjusted on the go to reflect how much assistance you get throughout. I left mine on level 1 throughout which gave me a little bit of a kick, while the accelerator throttle on the handlebar (not as terrifying as it sounds, I promise), was good fun to use on the long stretches on open pavement. But don’t worry, because you get a full briefing on all of that before you set off! Is a Cycling Tour a Good Way To See London?

I’ve done walking, boat and bus tours of London, which I all enjoyed in their own ways. But there’s something about cycling which blows them all out the water.

Before now, the very thought of cycling through London had me breaking out in a cold sweat. But after popping my biking cherry with Golden Tours, I’m actually convinced that cycling is one of the best ways to see the capital. In three short hours I managed to see a completely different side to London which I doubt I would ever have seen otherwise. And, despite studying history in London for three years, I still came away from the tour with my mind overflowing with incredible facts and a desire to know even more about the city I spend so much time in!

And now, if you’ve made it to the end of this article, I applaud you – and reward you with this goofy picture of me with my bike taken after the tour. Loving my little half in/half out tucking in going on over there… Disclaimer: I was provided with a complimentary spot on this morning with Golden Tours. However, all thoughts and views are my own 🙂

The Royal Parks and Palaces Tour leaves from the Golden Tours office at 10am. It runs every day of the week and is available from £24 per adult (with discounts for children, seniors and students). Click here for more details!