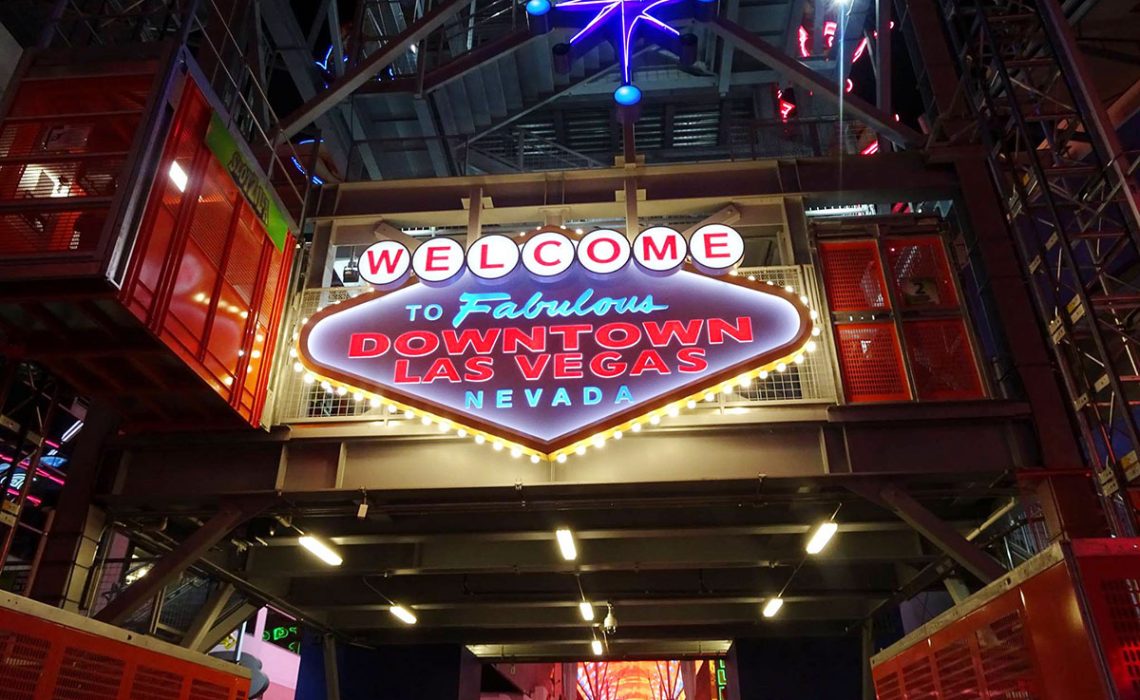 When visiting Vegas, it’s tempting to stay on the Strip to get the full Sin City experience. And while I saw all the main sights of the Strip – from the ‘Welcome to Fabulous Las Vegas’ sign to the more offbeat attractions – I’m so glad I took some time to visit Downtown Vegas. Located just 5 miles north of the Strip, Downtown Vegas is often overlooked by some because it’s not as ‘flashy’ or as OTT as what you’ll find in the main tourist area. But if you’re into delving into the history of a city, I cannot recommend it highly enough. Public buses will take you there in around half an hour from the Strip, but for door-to-door convenience I’d recommend taking a short cab ride.

As the original gambling district of Vegas, before the Strip came into existence, the Downtown area is home to culture, history and thrills. If you’re interested in saving some pennies, Downtown Vegas can also be the place to find cheap accommodation – find out various bloggers’ picks of off-strip Vegas hotels in Expedia’s Hotel Edit article. For now though, here are 7 reasons why you most definitely shouldn’t dismiss a visit to Downtown Vegas! Just me, hanging out in the Fremont Street Experience!

Visiting Fremont Street is like getting a small glimpse into how Vegas was over 100 years ago – it was the site of Vegas’ first hotel, the first telephone and the first high-rise building, so you could say this is where it all began!

The Fremont Street Experience is an entire entertainment district downtown which can easily rival the Strip when it comes to flashy lights and neon signs. The centrepiece of the Experience is Viva Vision which, at 1,500 feet long, is the world’s largest video screen. 6-minute light and sound shows run on the hour from 6pm and are definitely worth checking out. When not gazing up, there’s more than enough to keep you busy, from casinos to restaurants and live music. When we were there there was also a few random Chippendales taking photos with the ‘fans’ (I don’t have a photo, sorry guys), so pretty much anything goes here! Running underneath Fremont Street’s huge TV screen, SlotZilla is a zip line that runs on two levels; a lower one where you sit down, and a higher one where you lie down on your front and fly like a bird. I was SO prepared to hop on before I arrived in Vegas. And then when I got there and saw how high up (77ft) and how long (850ft) it was, I kinda chickened out. I did get to live vicariously through my friend though, who is a much bigger daredevil than me. I wrote more about the Golden Nugget for Expedia’s Hotel Edit article but, in short, this luxury hotel is definitely worth a visit. I actually found much more variety in the casino games here than in the Strip’s casinos – they felt a lot more accessible to first-time players. If you decide to stay here, though, you’ll be in for a treat. The hotel has its very own shark tank, with a water slide running right through it! The one thing I regret about my trip to Vegas? Not visiting the Mob Museum (officially known as  the National Museum of Organised Crime and Law Enforcement). I find some museums can be a little hit and miss, but all I’ve heard since coming home is people raving about just how good this one is. If only I’d heard everyone raving about it before I went, I would have found the time to squeeze it in… So consider this your official heads up if you’re heading to Vegas any time soon! The Neon Museum was by far one of the coolest things we did in Downtown Vegas. Dedicated to preserving old neon signs from the city, the non-profit organisation features retro signs over 6 acres. It’s the backdrop for many a cool, edgy photoshoot, but guided tours are held daily, with tickets ranging from $15 to $28 (£10.85 to £20.26). There are also nighttime tours if you fancy seeing all the neon signs all lit up. It’s technically not *in* Downtown Vegas, but it’s closer to it than the Strip, so I’m counting it… On my first trip to the US back in 2012, I got absolutely obsessed with watching Pawn Stars, a reality TV show about a Vegas-based pawn shop. That pawn shop actually exists and can be visited – except you’ll have to be patient, as it’s estimated that around 4,000 people visit the shop every single day, making it more popular than the city’s iconic wedding chapels. We didn’t actually have the time to go when we were there, but we drove past it and the queue snaked right down the street. Get there early! Even if you decide not to eat in Downtown Vegas, the restaurant exteriors can be enough to keep you entertained! For one there’s Heart Attack Grill, which focuses on creating the most unhealthy food combos ever to diners dressed in hospital gowns. As the sign outside says, anyone who weighs over 350lbs (25 stone) eats for free, which seems a bit mental but hey. Fremont Street is also home to Hugo’s Cellar which consistently gets all the excellent ratings on TripAdvisor for its delicious meals and cosy atmosphere.

This post was created in collaboration with Expedia. However, all thoughts, opinions and Vegas love are my own!
Pin for later!