Chasing The Northern Lights Above The Arctic Circle 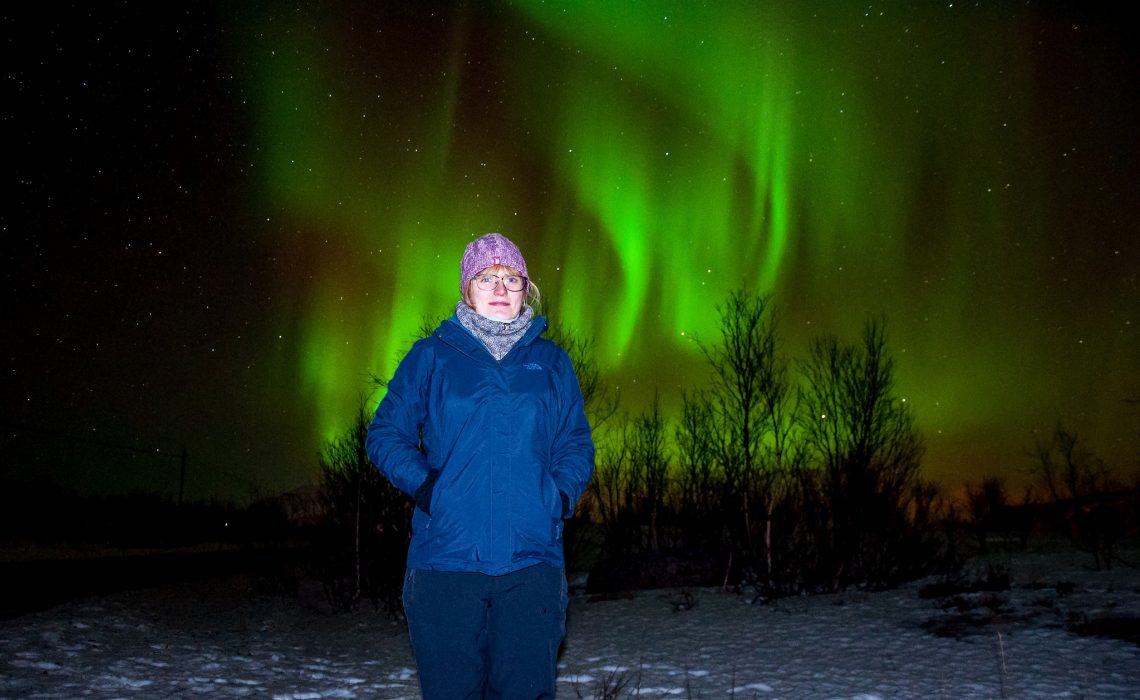 “First of all, the weather tonight is bad…but the sky is clear, so who knows what’ll happen?”

As we bundled into the tiny van, hidden by our copious layers of thermals, the mood was undeniably one of nervous excitement. Seeing the Northern Lights is never a guarantee, even after you’ve shelled out hundreds of pounds on flights to the Arctic, accommodation, warm clothing, and the obligatory chasing the lights tour. There are so many variables that could have a factor in your success: everything from the cloud cover to the weather, to just being in the right place at the right time. Plus a heck of a lot of luck. So, no pressure then, eh?

Before we headed out to Tromso, Norway (in January 2018), I’d booked us onto a tour with Polar Adventures with two main motivating factors: its price (at £117.03pp, it’s one of the cheapest out there), plus the fact it was a small tour. Our tiny van, eclipsed by the gigantic coaches picking up large groups from hotels, held just 6 eager Northern Lights chasers – 7 if you include our fantastic guide Carollyna, whose move from Poland to Norway was motivated in part by her passion for the lights.

Heading Out to Find the Lights

After excitingly meeting our guide at 7pm, we took off on an initial 40-minute drive out of Tromso; although it’s possible to see the lights while in town, to maximise your chances it’s best to get away from all the light pollution. The lights are actually ‘there’ all the time, but to see them with the naked eye you need clear skies as well as less interference from light sources.

After a drive down some long, bumpy roads – Carollyna regularly turning the headlights off and peering up at the sky as she went – we pulled over at the side of a road. It was so pitch black, we couldn’t see a single thing. Not even the massive lake that was apparently right next to us! We stood in the cold, staring at the skies, feeling like there was going to be a flash of colour at any second. We waited. And waited. And froze. And waited some more. But with no Northern Lights making an appearance, we hopped into the van once again to find another hopeful spot.

We must have been driving for another 10/15 minutes when we stopped again. This time we really were in the middle of nowhere. There was no one to be seen, just the tops of gigantic snowy mountains visible all around us. (Fun fact: we apparently stopped just outside a town where Prince Harry apparently took Meghan Markle last year!)

Carollyna seemed more hopeful about this spot. And to prove it, she even got out her own camera (plus some tripods she provided us for free), to get photographing. If you do decide to go with Polar Adventures (and I’d highly recommend it), I sincerely hope you get Carollyna. As a photographer, she was able to give us a quick 1-on-1 tutorial on how to set up our Nikon D300 camera so that we could photograph the lights – “rotate the shutter right to the left, and then a little to the right, and then set your shutter speed to 15 seconds.”

When you decide to go on a Northern Lights tour, one thing you need is a heck of a lot of patience. For the first half hour, we were quite literally just standing around in the middle of nowhere, cameras poised, and staring up at the sky wondering whether a bit of cloud was actually the Northern Lights in disguise. You’re constantly on edge, because you don’t know whether it’s going to be your day, or whether it will be your day and it’s going to quickly flash behind you and then disappear before you have a chance to spin round. Oh god it’s all so stressful.

For us, though, it was more of a gradual thing. At least, at first.  “Who wants a photo with the Northern Lights?!” Carollyna cried out, pointing to a faded grey band in the sky, arched like a rainbow but barely visible. We all struggled to appear too enthusiastic – was that what we’d travelled 2000+ miles to see? Why wasn’t it bright green and dancing around the sky like in the photos? I’m going to be honest: to say I was underwhelmed at this moment in time was a little bit of an understatement! Nonetheless, we all had our photos taken by Carollyna in front of the lights, which came out bright green on camera thanks to the exposure length. This also meant we had to stay completely still for several seconds in order to avoid appearing like a ghost on camera. I suddenly had SO much respect for people who pull stupid poses in front of the lights… We watched the sky, and the grey band of lights, for a good half an hour before we decided that we could take no more of the cold and needed some outside help. From food and drink. Carollyna opened up the back of the van to reveal a huge vat of warm, vegetable soup (as well as hot chocolate). We huddled around the back of the van, each receiving our bowl of lifesaving warm food in turn. When one girl shouted “Woah!” we just thought she was getting really enthusiastic about the soup. But nope, it turned out that as our backs were turned, the lights had decided to put on a real display. Which is just sod’s law isn’t it?

With our soup in hand, we turned to see the lights had unfolded into a giant flurry across the sky, zig-zagging and waving around, with flashes of green shooting everywhere. Now this was more like it! We all eagerly had more photos in front of the lights, this time with them showing up just a little more impressively. But it turns out, the lights weren’t finished with us yet. Because we stuck around for another hour (with intermittent breaks in the van to warm up), hoping to catch the lights in full force. And for once, I was one of the first to see it! Me and Ian were standing on the side of the road chatting to another guy, while everyone else huddled around the van trying to put heat holders in their shoes and their gloves.

“Erm, guys? You might want to look up!” I shouted over in what’s possibly the most British way possible of saying “HOLY SH*T LOOK AT WHAT’S HAPPENING RIGHT ABOVE YOUR HEAD.” The lights pounced and played over the mountain tops, breaking out into colours across the entire sky. It was just us 7, staring up in complete silence and soaking up every second. Now, every second of feeling like my toes would have to be amputated because of the cold was worth it for those precious few minutes of the sensational lights. But I cannot tell you just how happy I was to get back into that van to warm up. And I think that was a sentiment that was shared by almost everyone in our little group…Carollyna got back into the driver’s seat, turned round, and saw us all just sitting there huddled together, chomping on the complimentary biscuits! I think she was a little shocked that we felt ‘done’, but we started off on the journey back to Tromso.

We stopped off at the first stop again to see more of the lights, but half of the van didn’t even get out because they were enjoying the warmth way too much! Nevertheless, the lights stayed visible to wave us goodbye as we set off again, all of us in a happy, relieved bubble of warmth that turned into a little nap. We were dropped off outside the Radisson Blu hotel, and collapsed into our bed at 1am, sleepy but filled with the kind of happiness that only comes from ticking off your #1 bucket list experience!

** All the photos in this post were taken by us, apart from the ones with us in it – many thanks to Carollyna from Polar Adventures for letting me use them!

Pin it for later!