How To Do Budapest to Prague By Train 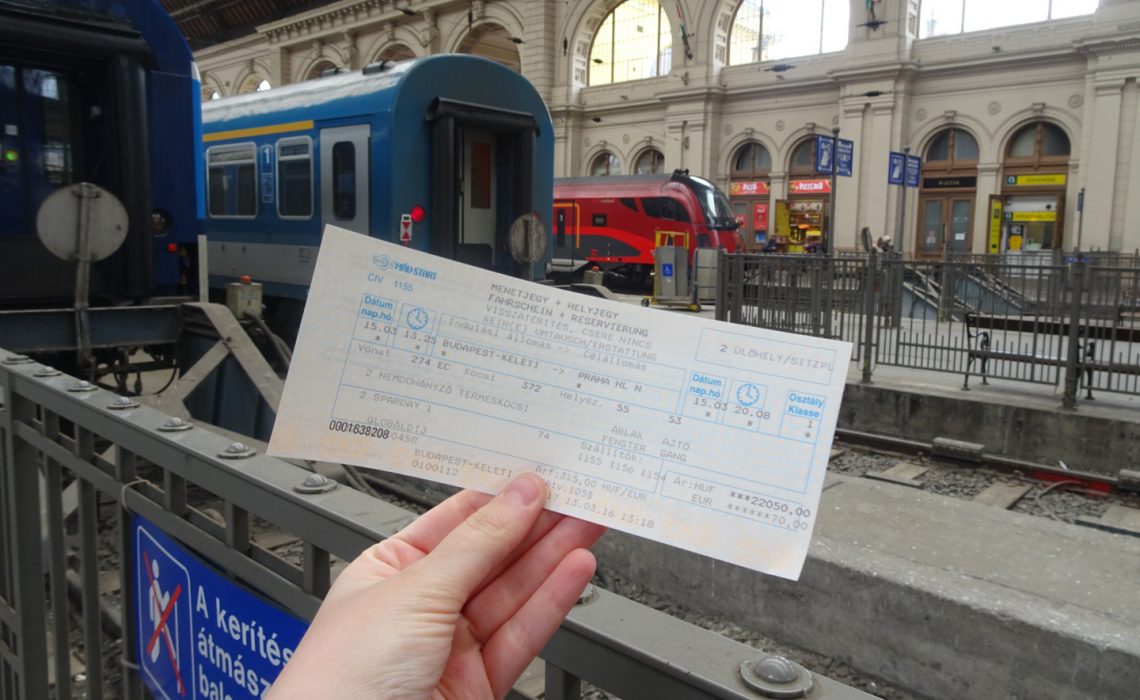 Call us nerds, but one of the reasons by boyfriend and I opted to go to Prague and Budapest was because of the potential to do our own mini rail trip. As in, ‘one city to another’ mini. But it was epic from start to finish. We picked this route because it linked up two cities we’ve always fancied seeing, and it was the perfect little adventure to have in 5 days. If you fancy doing it yourself, here’s how we did it!

Going from Budapest’s Keleti train station and arriving at Prague’s central Hlavni Nadrazi station, the journey typically takes around 7-8 hours, although there’s a 10-hour overnight sleeper train if you’re looking to maximise your time in both cities. (I read somewhere that the sleeper train pulls over for a few hours just outside Prague so that it rolls into the city at the more acceptable time of 6:39am.) The original plan was for us to get the overnight train, but then one of us read a bad review or something about pickpockets, and we wimped out. It would have been an adventure for sure though, and part of me feels we did miss out. But we consoled ourselves with the fact that travelling in the daytime would allow us to see much more of the Hungarian/Czech Republic scenery as we whizzed past. Plus we also got to see a bit of Slovakia as we took a detour through Bratislava, so swings and roundabouts… Not going to lie: I’m still a bit confused about the ‘buying ticket’ situation. There are a number of websites around that offer you the chance to buy a ticket from Budapest to Prague by train (and vice versa) like czech-transport.com and www.cd.cz, the latter of which was recommended by our hotel in Prague. After a bit of research, we found that these sites are more of a ‘middle-man’ designed to over-inflate the ticket prices for tourists. I then contacted the www.cd.cz customer service, and they said that it’s not possible to buy the tickets online.

Confused? Yeah, me too.

In the end, we decided to leave it in the lap of the gods, and go book our tickets in person when we arrived in Budapest, a few days before we actually needed to travel. This was a source of great anxiety for us worry-worts, because we were convinced all the seats would have been sold and we’d have to cancel our Prague hotel and find emergency flights home (like we were in the middle of the bloody Amazonian rainforest rather than on Easyjet’s doorstep).

As it turns out, it was all fine. We were even persuaded to get two 1st class seats, which worked out to be 22,500 HUF (approx 70 Euros/£60) for the pair. And actually, taking a look at the aforementioned train websites, you’d be looking at paying over DOUBLE that online. Much better to get the ticket from the station, but might be best to have a bit of travel flexibility, especially in peak season. Budapest to Prague by train

I’ve never travelled long-distance in 1st class, so I wasn’t sure what I was expecting. I imagined there might be an included three-course meal at some point, maybe free drinks going round the carriage. Unfortunately, there was none of that. But there were some comfy seats (in a quiet and relatively empty carriage), plus free WiFi when you arrive in the Czech Republic. Is it worth paying a little bit more to sit in 1st class? Potentially. If you’re someone who likes your space and comfort, then 1st class might be the one for you. The journey itself was easy, and our carriage was right by the bar so we were about to stock up on snacks and drinks with ease. The views were a steady mix of countryside and cityscapes – probably not as exciting as you might expect, but still fun to watch if you’re an avid out-the-window gazer like me. As we were rolling into Prague’s station just after 8pm, we opted to pre-book one night at the 987 Design Prague Hotel, rather than faff around with trying to extend our stay at Residence Agnes. That was another £60 between us (which included breakfast), but after a long day of sitting around doing nothing we were glad to just walk across the road from the station to the hotel. Plus it was right by Wenceslas Square, so we got to experience a different side to Prague before we headed over towards the Old Town. A word of warning though: if you’re going to navigate your way around Prague’s cobbled streets with a wheeled suitcase, you’re going to have a bad time… Overall, doing Budapest to Prague by train was super relaxing, especially after a manic few days running around seeing what the capital of Hungary had to offer. If I had a bit more time, I would have liked to have stopped off in Bratislava (or Vienna, as some trains go through there too!) for a bit – but that’s always a plan for next time.

Do you enjoy train travel? Would this journey be something you’d like to do?