A Staycation With a Difference At Roomzzz Stratford 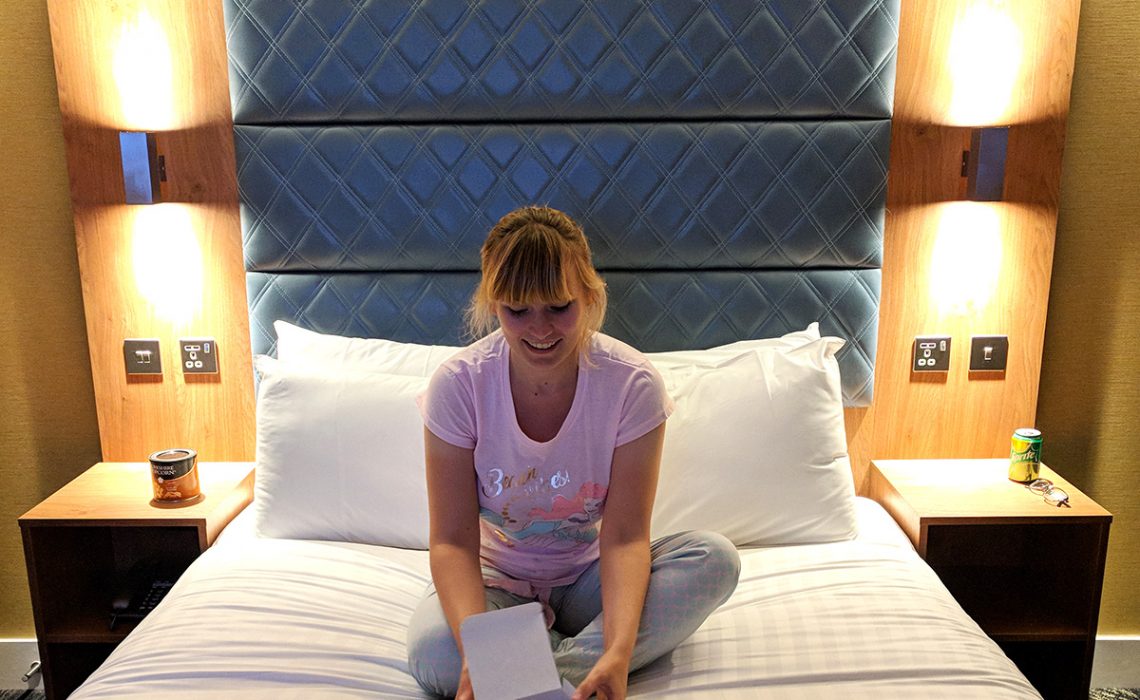 A few months back, I was invited to stay at the brand new Roomzzz aparthotel in Stratford, East London. With its central location just minutes away from Westfield shopping centre, I was so excited to finally rock up with Sophie (from Luggage Tags and Ticket Stubs) in tow last weekend, ready for a relaxing few days.

Honestly, this stay couldn’t have come at a better time. The weekend gave us a much-needed break from job hunting (actually that’s just me), and stressing about general life problems (OK, me again, sorry).

There’s been a lot of buzz around Roomzzz recently, but in case you’ve yet to hear of them, here’s a little more about them. Roomzzz offer a series of ‘aparthotels’ across various UK cities, including Leeds, Manchester, Chester, Newcastle, Nottingham and London. While similar in essence to a hotel – you check in, get your room key, and have 24/7 reception service – the aparthotels offer you a home-from-home in the form of your own little apartment.

And that’s exactly what greeted Sophie and I when we opened the door on our accommodation for the weekend. With a lounge area, kitchen, bedroom and bathroom, I’m pretty certain that the apartment had more floor space than my own flat! And that’s not to mention the fact we had our very own little balcony, complete with two chairs, table, and views out over Stratford Park. The first thing we had to do before we went out exploring was to have a nosey around our cosy apartment. Our kitchen was fully stocked with everything from teabags to utensils, crockery and even a dishwasher! I loved the fact that the kitchen had a microwave and an oven, giving you the option to bung in something cheap and quick if you just fancied a night in. It all felt and looked so squeaky new and clean, that we barely wanted to touch anything! Next stop was the bathroom! I loved the fact there was a choice of two shower heads – including a rain shower! – plus shower gel and shampoo/conditioner from The White Company. This is quite literally an apartment you could check into and have virtually all of your needs catered for. And then there was the bedroom, with its grand double bed, plump cushions…all pointed towards a great big HD TV on the wall. As much as I was tempted to flop into bed straight away, I had to remind myself it was only 3 o’ clock in the afternoon…so I settled for flopping onto the sofa in our lounge instead for a little bit of European Championships coverage on our second HD TV. That’s right, the ratio of people to HD TVs in our Roomzzz apartment was INSANE. Once we’d pulled ourselves away from the comfort of the sofa, Sophie and I decided to head out to explore more of what was on our doorstep. That wasn’t before we had a small recce around the Roomzzz facilities downstairs, which includes a fully equipped gym, a lounge area and a small shop where you can pick up groceries and snacks. Honestly, if you weren’t that interested in seeing much of London, you could pretty much live in one of these Roomzzz apartments and not leave for weeks. While Stratford isn’t a part of London that’s new to us – Sophie used to live round the corner and Westfield shopping centre has saved my life on many an emergency shopping trip outing – we decided to view the area with fresh eyes. The rest of London is so easily accessible via Stratford’s superb transport links, but we decided to stay in the area as much as we could. From Roomzzz, it’s a 20-minute walk to the Olympic Park which was where we headed off to while it was still light.

Firstly, I love the Olympic Park. Walking around the park fills me with so much nostalgia from the summer of 2012, plus it’s also somewhere that feels so incredibly peaceful. Despite being next to Europe’s biggest shopping centre, it’s large enough to make you feel like you’re miles away from civilisation – that is, until you look up and spot the city’s skyscrapers looming in the distance.

The Arcelormittal Orbit is one of the most iconic landmarks in Stratford. Situated right next to the Olympic Stadium, it’s possible to slide or abseil down the 114.5-metre-high sculpture (both of which Sophie has done in the past few months…). Or you can just do what I did and head up there in the lift and walk down. Each to their own.

While walking around the park we also stumbled upon an open-air climbing wall which I had absolutely no idea was there! We had a quick climb up a few of the foot holds, and then panicked and legged it back down again. Skills. Before we’d even realised it, our walk around the park had quickly inched into the evening. On the way back to our apartment, we stopped off in Westfield shopping centre to pick up two essential items: doughnuts from Doughnut Time, and matching Disney pyjamas from Primark. It’s not a proper sleepover without them, after all, is it? While it would have made sense for us to get a few groceries in and whip up some marvellous concoction in our brand spanking new shiny apartment kitchen, we, uh, decided to get a takeaway instead. We were spoilt for choice on Deliveroo, but we plumped for pad thais from Rosa’s Thai Cafe (with prawns for Soph, and tofu for me). It was hands downs one of the best takeaways I’ve had in recent memory.

Being the awesome bloggers that we are, we decided to chill for the evening in matching PJs with our doughnuts and some crappy movies on the TV. It was bliss. Most city breaks see me getting up at an absurd hour to make the most of my time in a new place. Whether it was the comfortable bed or the fact we were still digesting that delicious Thai, Sophie and I didn’t stir until almost 10am. Thankfully, we still had enough time to run downstairs and collect our grab and go breakfast. The breakfast station had pastries, muffins, fruit, yogurts, hot drinks and juices, and you can fill up your brown bag with as much as you like. Of course, this is intended to benefit those who want to head straight out to explore, but Sophie and I sloped back to bed with our haul…

Once we’d eventually showered, dressed and checked out (thank goodness for the option to check out a little later for a surcharge), we lovingly bid our apartment goodbye, and decided to go for an early lunch in nearby Hackney Central. Just a few stops from Stratford, Hackney is home to lots of cool pubs and bars, but one cafe in particular is getting Instagram talking. With its hanging plants, pastel colours and edible glitter lattes, Palm Vaults is an Instagrammer’s dream. It’s recently expanded its menu to include toasties and lots of avocado-based snacks, so you can be sure you’ll be getting the full hipster experience. While I felt it was a little on the pricey side (and the service was a little lacking, but that’s another story), it was a fun place to visit for an hour or so. Sophie opted for the rose latte with edible glitter art, while I had the colour-changing lavender iced tea. We both had some aesthetically pleasing pink cake too, neither of which we really NEEDED to eat, but seeing as we were there… Oh, and another tip if you do head there: be sure to wear layers. Whether it was to do with the heating or the optimum plant environment, the cafe was boiling. We were pleased to get back out into the fresh air and back on the train towards Stratford!

Our last stop was at Roof East in Stratford, accessed via lifts within Stratford Centre. Once a rooftop car park, it’s now styled as a summer-only ‘adventure playground for grown ups’, complete with crazy golf, bars, street food, and a rooftop cinema. We were hoping to come here the day before to relax (and hopefully catch a rooftop movie) but for some reason it was closed. By the time we eventually got there around 2pm on the Sunday, it was a little rainy and we were virtually the only two up there. Nonetheless, I can totally see how Roof East would be the most awesome spot for nighttime gatherings during the warm summer months. Even if you don’t want to pay for some of the games, there’s still plenty to see. There’s colourful wall art, deck chairs and giant Jenga games, amongst lots of quirky art features. It’s one of those places you could easily spend nothing…but also easily spend half your wage. Enter at your peril! Final Thoughts on Our Weekend With Roomzzz Stratford

Before now, I’d thought of Stratford as only being a transitory part of London, visited only if you were looking for some new clothes or wanting to see a football game at the Olympic Stadium. My weekend with Roomzzz completely changed that perspective. Stratford itself has a thriving atmosphere, and there’s so much on your doorstep that it really is such a good location to base yourself in if you’re ever visiting London. The ability to have your own apartment at a Roomzzz aparthotel is particularly novel, and I loved how you could still have your independence while still benefitting from the 24/7 security and knowledge from the concierge. We both had such a comfortable and trouble-free visit, that I couldn’t recommend staying here enough!

Sophie and I were guests of Roomzzz, however all thoughts and weekend activities are my own.