When I’m not travelling or working, I can be found at my home in Essex with my two ginger loves: Jim and Ralph. They’re both rescues, but with very different quirks and personalities. As the older of the cats, Jim is what you would call my OG: Original Ginger. He’s ginger with a white bib and socks, and he’s quite possibly the soppiest cat you’ll ever meet. Everyone who meets him instantly falls in love with him and wants to take him home! Jim was found in a Basildon carpark and taking into foster care when he was a kitten. As soon as I saw him on the Cats Protection League website, I knew he was destined to be mine. Those big ears! Those gorgeous eyes! He came to live with us at the age of 7 months, bringing endless rays of sunshine into our household. He also brought a fair lot of mischief, getting repeatedly stuck up trees and on roofs for days on end until someone built up the courage to climb up on a ladder or a bin to rescue him! 5 years on, he’s calmed down. A lot. He’s often found curled up next to radiators or on beds, but he does love to follow either myself or my mum on walks around the town (…and get carried half the way because of the big, scary roads). Despite being an absolute wimp, we’ve recently discovered that it’s him who keeps bringing dead mice into the house – not his younger brother Ralph… Even though he’s technically Jim’s younger brother, there’s no actual ~biological~ relationship there. But hey, DNA means nothing 😉 Ralph as a tiny kitten!

Ralph came into our house as a tiny kitten after being abandoned by his owners. He’s the first cat I’ve actually named (Jim was already called that when we got him!), and I named him after the most adorable old man my mum and I had got to know. Ralph is completely ginger with the pinkest little nose and black/white whiskers. Of the two cats, Ralph’s definitely the more adventurous one. He was jumping over fences, hopping down trees and chasing after birds from the moment we let him outside. He’s also the more wriggly of the pair, and will often escape from your clutches if you try to hold him like a banana baby.

While Ralph loves to play fight (and bite), he is an absolute softie underneath it all. He loves to lick blankets, curl up in boxes and lick him brother Jim when he thinks no one is watching. 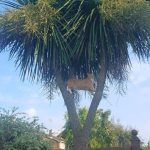 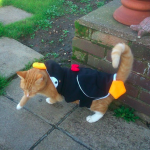 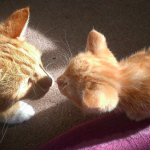 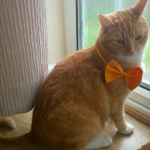 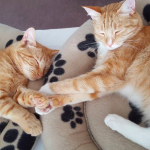 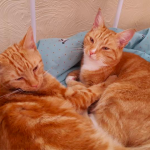 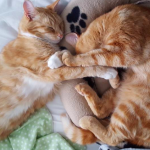 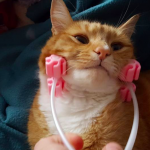